A passionate seed saver …  and grower of rice and peanuts

A passionate seed saver …  and grower of rice and peanuts

All excellent advice from Sylvia Davatz, a seed saver who focuses on hardy vegetables for our northern climate and experiments with grains such as rice, barley, wheat, sorghum, amaranth, and oats in Hartland, Vermont. Clearly Sylvia is not someone to rest on her laurels!

I came across Sylvia’s name while researching seed catalog companies that make donations to nonprofits (for our seed catalog at the Nelson Library). One catalog spoke to my soul and the name, in my opinion, is perfect: Seed Savers Exchange (SSE). Seed Savers Exchange is a tax-exempt 501(c)3 nonprofit organization, dedicated to the preservation of heirloom seeds, located in Decorah, Iowa.

Sylvia lists 176 different varieties of seed on the Seed Saver Exchange, including various varieties of beans, peas, tomatoes, celery, beets, corn (both flint and popcorn), lettuces, and others. Sylvia promptly responded to my email and she graciously agreed to an interview. I offered to drive to her home just over an hour away, located just south of Norwich, VT. The night before my visit we’d had one inch of snowfall and she had three inches. Sylvia’s growing zone is similar or slightly colder to what we have in the hills of Nelson. Anything Sylvia can grow, we can grow.

Thirty years of gardening in the same location is evident, even in winter. Looking over her snow-covered yard, I clearly see many raised beds, perennial plants such as pawpaw (really, pawpaw in New England!), hardy kiwi, and of course blueberries, and a lovely greenhouse that I feel, well, green with envy over.

Sylvia is passionate about heirloom varieties, and experimenting with grains is her latest passion. Being a thrifty New Englander, she naturally gravitated towards seed saving. Interestingly, fourteen years ago Sylvia started a seed catalog of the heirloom varieties she was growing, and it had a small circulation amongst friends and fellow seed savers. Solstice Seeds, Sylvia’s catalog, is now listed online by her neighbor, whom she is mentoring in seed saving. Each year, they coordinate what they grow to prevent cross-pollination and keep the stock of seed viable.

Sylvia had suggested we visit in her unheated greenhouse, which was warmer than the outdoors. It was a comfortable temperature even though it was a cloudy day. The greenhouse is a lean-to design with a solid, insulated north wall so it can capture and release heat over the night. We were two gardeners discussing a shared passion for growing and eating delicious locally grown vegetables. I asked her why she saves seeds and she said seed saving is “elemental, grounding, and feels essential to protect biodiversity.” We agreed there is a feeling of connection to the past and lamented that so many favorite varieties are disappearing.

By growing and saving seed we can continue the lineage of a grandparent’s zucchini, or a variety of bean a dear friend passed on to us, or a just-acquired heirloom seed. What can be better than saving seed from a variety that thrived in our garden, survived through drought and frost, or saving seed from an amazing heirloom tomato from the farmer’s market? It all boils down to love of eating, and honoring  both the past and possibilities for the future.

Chatting with Sylvia was like visiting a long-lost dear friend. She shared that her first seed saving experience was more than likely tomatoes. (Her favorite was a hybrid, so it mustn’t have been that one! When saving seeds from hybrid plants, the seed it yields won’t grow to be like the parent plant.) She stresses that when saving seed, save only open pollinated varieties.  That way you will get the same plant every year. Laughing, she also shared that sometimes it’s fun to pick a variety of  seed by its name, for example Drunken Woman Frizzy Headed lettuce. What a fun name!

When I asked about her seed catalog she said that when you have enough plants for genetic diversity, you end up with a staggering amount of seed. “Nature is abundant! Part of the reason for starting the catalog in 2008 was that I wanted to promote the idea of seed saving by writing about it and offering interesting varieties, not available elsewhere.” The Solstice Seed catalogue was published for nine years, until 2017.

Sylvia doesn’t recall when or how she learned about SSE. She says, “From the very first, I began making connections with wonderful, interesting, generous-spirited people who were also dedicated to seed saving. And I found dozens of fascinating varieties, many of which I still maintain.” SSE and its members like Sylvia strive to keep culturally diverse and endangered food crops available for future generations, and us, thus ensuring biodiversity.

You may be curious about those hints from Sylvia: those reclosable plastic bags come in handy when you find seeds while traveling. Bring home seed from your trip and remember your vacation each time you enjoy that plant and its progeny. Sylvia suggests beginners start with a self-pollinating crop such as beans or peas. Let the pods dry on the vine, harvest, and remove the dried seeds. Keep the seeds in a cool location away from moisture.

As with most gardeners Sylvia tries to get away with growing plants not typically grown in New England. She listed off the names of four varieties of peanuts and asked if I had ever had peanut butter from fresh peanuts. She said it is creamy, almost buttery, and delicious! I’m hooked; I have to find peanuts to grow next year! It is clear that Sylvia is an exceptional gardener. She works with researchers from University of Vermont on grain experiments, is friends with the former director of variety trials at Fedco, grows plants for a nonprofit Swiss seed saving catalog, and in her spare time is willing to travel (post-Covid) to Nelson to give a seed-saving workshop!

Sylvia compiles all her 176 varieties of seed in a spreadsheet including life expectancy and other characteristics that helps her plan what she needs to grow each year. She stores her seeds in reclosable plastic bags in a refrigerator or her cold cellar.

Sylvia became interested in growing grains when she met Eli Rogosa, Director of the Heritage Grain Conservancy, at a winter NOFA (New England Organic Farmers Association) gathering. Eli had been doing work with ancient grains and had at her table several huge sheaves of the most beautiful grains you could imagine. Sylvia says, “I was instantly hooked. Eli generously shared many of her seeds with me and to this day we have a close connection.”

From Sylvia: “Growing grains connects me back to the earliest days of the domestication of wild plants. Grains are one of our most important staple foods. The range of varieties, personalities, potential uses, and sheer beauty of grains is enchanting. The greatest difficulty for me is reining in my curiosity and growing desires to stay within the bounds of what I have time and energy for, and the space to grow in!” 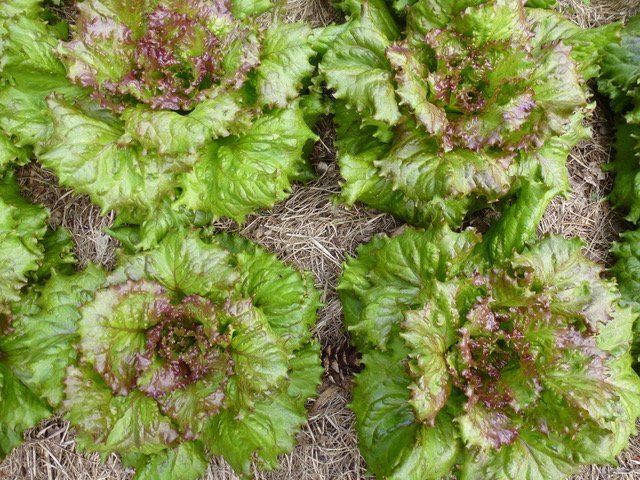 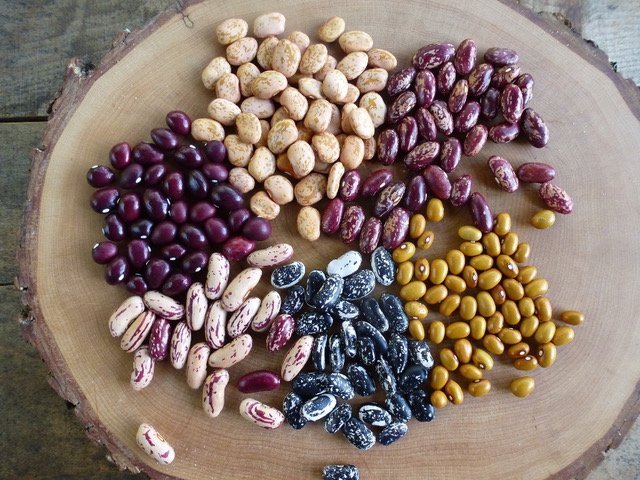 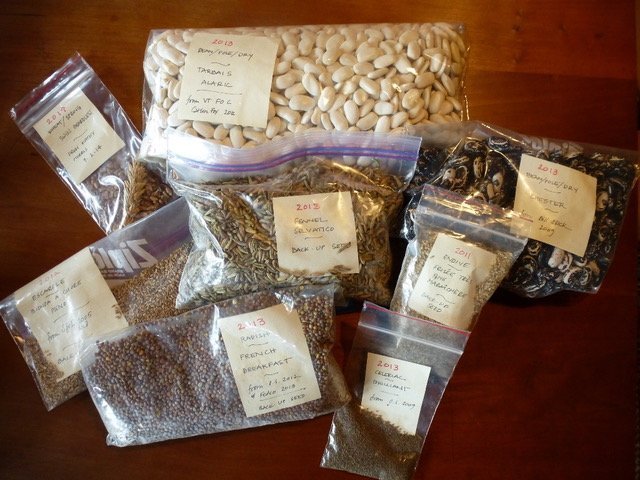 Packets of seeds ready for storage.

Visit the Nelson Agricultural Commission page on this website for more information about Nelson’s own seed saving program. 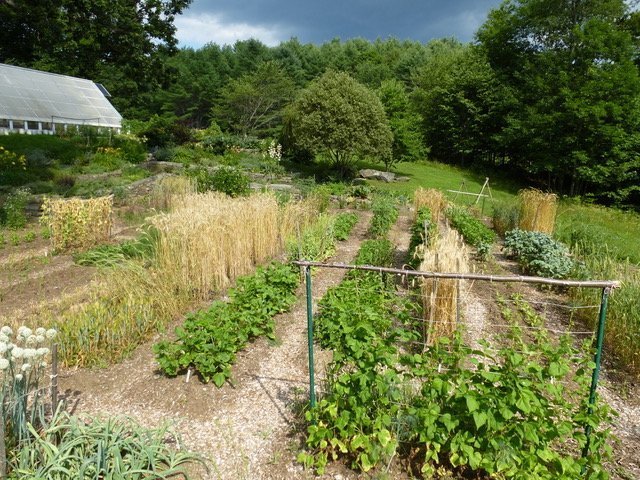 Garden with a bit of the greenhouse 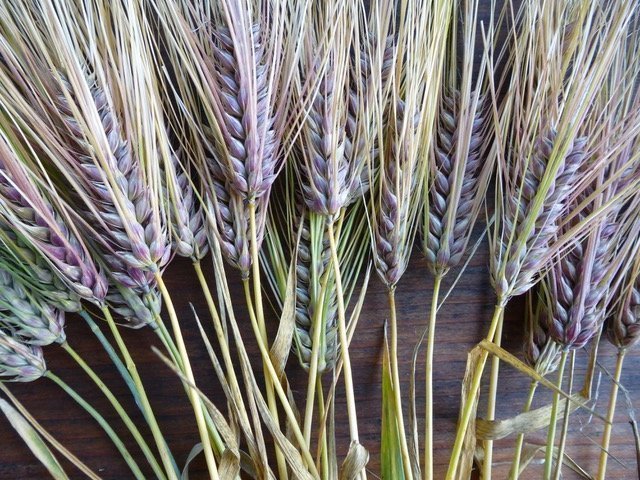