A while back some new house guests arrived.

They would wake us up with these weird scratching noises right above our bed at night. Sleep deprivation slowly drove us crazy. Removing interior wall pieces revealed no mouse hotels. We found no evidence of carpenter ants. Even banging on the wall didn’t stop the infernal scratching!

Turns out we were indeed driven bat-crazy by bats. We literally saw them crawling out from the tiniest of cracks.

Amazingly, a quick internet search provided an immediate solution. We simply draped light, plastic window screen from the outside of the eaves. Bats know enough to drop down far enough to escape this “valve” but not enough, upon their return flight, to drop down and go up to their nests. (That’s something they should add to The Bat School Syllabus.) 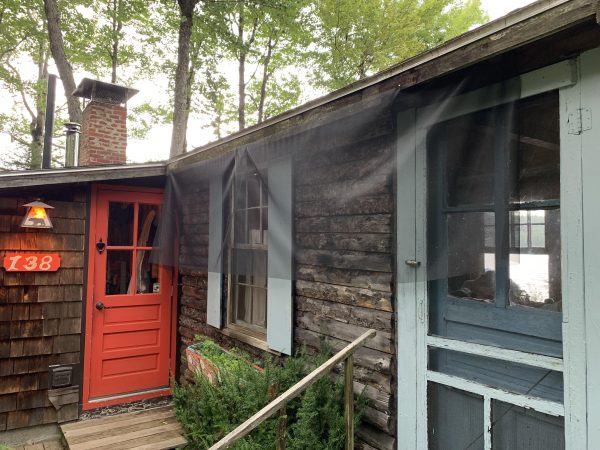 On the very first night, the returning bats could sense to avoid the curtain and simply found a different place to sleep. Maybe the neighbor’s house. We now sleep uninterrupted — at least by the bats.

Going forward, the plan is to keep the drapes up till the first freeze. During the winter we will remove more exterior siding to locate and clean out their hiding place. (The accumulated bat poop or guano is like a beacon to lure the bats back after winter). We’ll rehang the screen for the first month or two of spring.

Turns out fall is the perfect time to deploy “bat exclusion technology,” rather than doing so in late spring or early summer when baby bats (“pups”) could be left behind.

Note: No bats were killed during the production of this article.

Click the Play button below for 30 seconds of nostalgia

What happens when you make bat sausage?

It goes from bat to wurst!