The Nelson Trails Committee is wrapped up its eleventh year with an effort to restore blueberry picking on Hurd Hill. 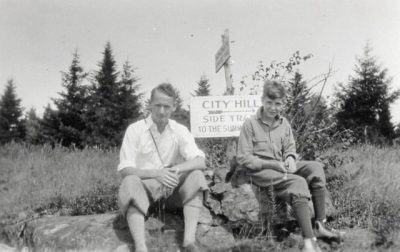 Hurd Hill rises above Tolman Pond to the north. Residents of the pond remember picking blueberries there as children when its summit was clear and there was a trail from their summer community. The soil is thin and poor, but perfect blueberry habitat. Over the years a few gnarly oaks and cherries along with a few ash and spruce have established themselves. Deprived of sunlight, the blueberry plants survived, but don’t produce berries any longer.

Last year the Nelson Trails Committee blazed a trail connecting Hurd Hill to the Partridge Woods trail network and added another trail from Hurd Hill to Osgood. With the support of the Nelson Conservation Commission, the Committee began a project to restore blueberry picking there. The plants are scattered over the entire hilltop and down its sides – an area of several acres. 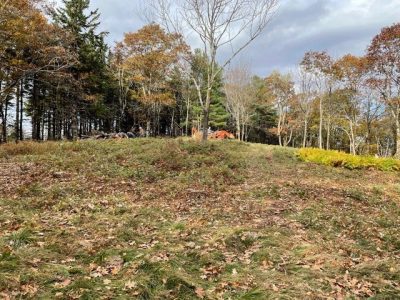 Last year and this spring the Committee cleared half an acre on the very top of the hill where the Ridge Trail and Hurd Hill Trails meet. A few blueberries were transplanted from the edge of the clearing to the center for better light. Last weekend a Trail Committee crew finished clearing and transplanted many more bushes from the adjoining woods to the clearing.

Fall is a good time for transplanting as the plants are dormant. Last year’s transplants survived in spite of a dry fall. This year’s were the immediate beneficiaries of several days of steady rain. They should do well. Raspberries we hadn’t noticed are thriving in the new clearing, too. In a few years we’ll have berry picking restored.