The Back Story: Edgar Seaver 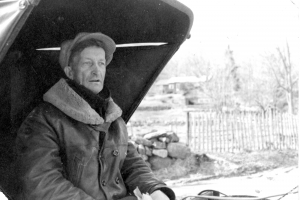 This photo: Edgar Seaver (1880-1978) delivering the mail by horse and buggy to Tolman Pond, 1939. Edgar brought the mail and the news for nearly half a century – a quick drop and a chat, then off in a cloud of dust to his next stop. There were complaints from some who declared him a menace on the road when he had to make up for lost time. Edgar took pride in his delivery vehicles and filled the back seat to look like an official post office on wheels, with a rack of inkpads and stamps, empty mailbags marked Special Delivery and Air Mail, and a basket for postage-due letters.

Edgar also had a couple of cars that he would use: a real beater, which was the default, and a “new car” (only twenty years old) that he drove on nice days.

He was known for his frugality, which is illustrated in this story.

Edgar Seaver made a daily trip to the post office in Marlborough to pick up the mail for delivery. One day he stepped into the back room and noticed a penny on the floor. Though he thought the post mistress was distracted with something else, she evidently picked up on his excitement, and she subtly witnessed him putting his shoe over the penny, until he contrived a pretense, perhaps tying a shoe, to reach down and take the penny.

The postmistress was quite amused at this, and after that, on occasions when she wanted a chuckle, she strategically placed a penny on the floor before Edgar arrived.

On the Hill Above Nelson School

My house is up on the hill above Nelson School and I can often hear the children playing outside when I am home during the week.

In the late 1970s the old Josiah Whitney home, owned by Peter Flint, caught fire. Peter’s Aunt Kate was home at the time.

Every year at Christmastime I am reminded of the very first Christmas we had here in Nelson. I don’t remember the exact date, but on one particular day in mid-ish December near suppertime there came a knock at the front door.

In a recent edition of the Black Fly Express, our editor used the word “plethora.” It reminded me of a town meeting a number of years ago . . .

To see if the town will vote to proclaim the Town of Nelson a voluntary and positive anachronism, and to authorize the Selectmen to . . .

Our First Day in Nelson

In 1977, Sam and I saw an ad in the Harvard Crimson (thank you Karen Tolman) for a camp for rent in Nelson, near a place called Tolman Pond. We had some friends in Peterborough and Hancock, so we decided to rent the cabin to get out of Cambridge in the summer.