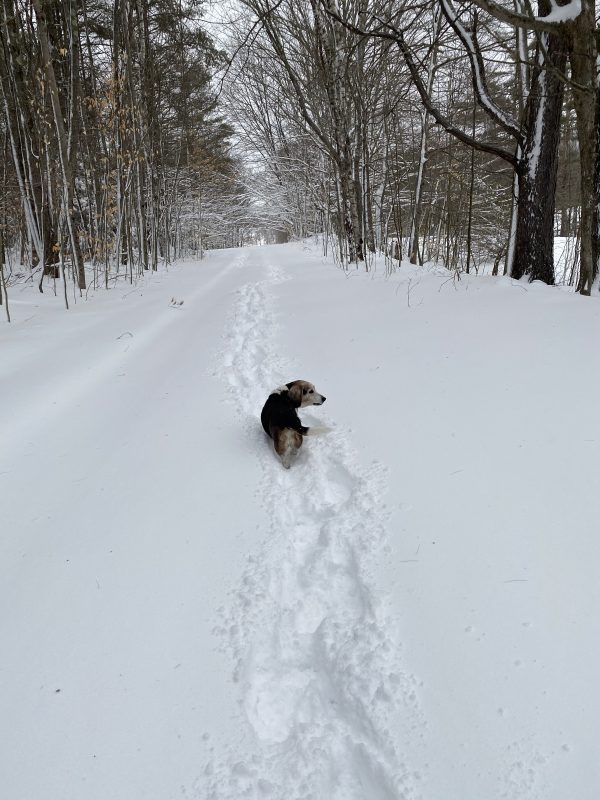 Ahh….. his field trips. Of course his favorite day of the week was Monday –  Contra Dance night.  He would sit in the field and wait for the dancers to begin arriving, hoping that his true love “Winnie” would be among them (Betsy Street’s dog).  Yes!  He spied her and off he went to entice her -not to dance- but to go off with him for the night to the most beautiful farms in the Monadnock Region.  Of course, they first stopped to swim in the Coughlin’s pond near their pretty gardens.  Then, off they went for the night.  Betsy and I would call each other to confirm that they were together and who would do pick-up. I recall going to the most exquisite farm in Marlborough early one morning and I think Betsy had a pick up in Roxbury.   Emmett and Winnie would be properly contrite and would crash for the day…..
Perhaps Emmett’s most famous adventure occurred the night before an Old Home Day……… Again, he was vigilant about perusing the Village and he often greeted any Monadnock-Sunapee hikers.  He enjoyed showing them exactly where the trail was., This particular time he led a father and son, laden with hiking paraphernalia, out of the Village.  According to their recount he stayed with them for several miles and once they realized he was pretty far from his home (and not going back) they had no cell service………. The morning of Old Home Day I got a call from the town clerk of Washington and drove to retrieve him.   He had very much enjoyed the campout, warm fire, and delicious food the hikers had provided.  Old Home Day games were in full force upon his return and Bud French over the loudspeaker asked everyone to welcome Emmett back from Washington.