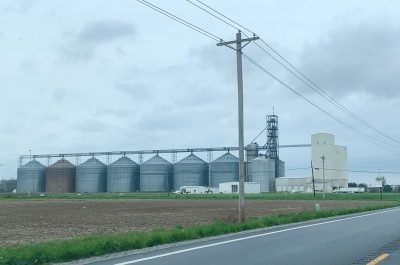 Traveling 8,000 miles in the month of May around our nation is a lot of sitting and a lot of driving. I have newfound appreciation for all the food we have available in our grocery stores.

In our little, and I do mean little, corner of New Hampshire we are used to trees everywhere, with glimpses of views between those trees on hilltops. We rely on watching the news or checking the Internet to know what weather to expect. In a large portion of this country, people can see weather approaching from miles away when stepping out their front door. Farmers driving equipment the size of a small house don’t need to sit a story high to see weather in the distance.

On our trip we traveled west through Ohio, Missouri, and Texas, out to California, and back on Interstate 80 through Utah, Wyoming, and Iowa. We experienced rain once, once in 30 days! The countryside was primarily hot, mostly 90-100-degree days.

As Tom and I drove, we discussed how farmers make a living from fields. With no rain and hot days, their fields require water. We saw many linear irrigation systems and pivoting systems, which make crop circles, I couldn’t help but think these systems looked like the skeleton of a Brontosaurus walking or rolling across fields. In east Texas we passed corn already thigh high in mid May, thanks to irrigation. In New Mexico we saw a sign that said “the miracle of water.” How true that statement is. In arid areas, pecan orchards flourished. Water does produce miracles. Through a quick search of the Internet I learned that New Mexico produces the largest amount of pecans in the nation, primarily in its southern counties. It is a miracle that in an area that resembles a desert, food crops thrive.

Most of the fields we passed appeared to be what is known as conventional farming. Each year the field is tilled by turning over the soil, adding fertilizer and seeding in straight rows. While passing fields, we would play a game of guess the crop. It was obvious which farms sprayed with glyphosate (Round-Up) in preparation to plant “Round-Up ready seeds” – those were the fields with no weeds, which compared with their neighbor’s weedy field.

The topography in Iowa was not flat, compared to the flatness of Nebraska. Iowa resembles a gentle ocean with swells and dips, rolling fields, or in many cases terraces. The terracing is probably safer to navigate on those mile-high combine harvesters, with the added benefit of preventing erosion.

Not all fields were irrigated. I didn’t see irrigation on the terraced fields. Many non-irrigated fields appeared dusty and dry. Dust devils, dirt picked up by swirling wind, sometimes pelted our car in several western states. Warning signs alerted motorists where dust storms were prevalent. Watching the swirling wind got us to thinking about the Grapes of Wrath by John Steinbeck, drought, winds that steal the soil away, and a decreasing aquifer that leads to sinking land. We did see areas that appeared to have fields that might have sunk over time.

Not all fields were irrigated. I didn’t see irrigation on the terraced fields. Many non-irrigated fields appeared dusty and dry. Dust devils, dirt picked up by swirling wind, sometimes pelted our car in several western states. Warning signs alerted motorists where dust storms were prevalent. Watching the swirling wind got us to thinking about the Grapes of Wrath by John Steinbeck, drought, winds that steal the soil away, and a decreasing aquifer that leads to sinking land. We did see areas that appeared to have fields that might have sunk over time. 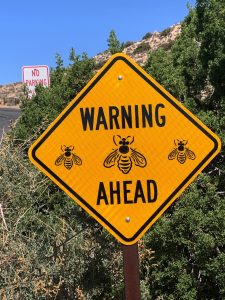 Even in the most arid of locations, there were signs of agriculture. In the Mojave Desert, Joshua Tree National Park is roughly 5,000 feet above sea level. Cacti are the predominant vegetation and … we saw wild honeybees! I watched several ladies fly amongst desert marigold flowers. A warning sign cautioned visitors about bees. In May, many flowers were in bloom.

Wyoming really is a big sky country. It has lots of hills and mountains, lots of sky, and fierce wind. Along the road in both Wyoming and Nebraska we saw what I would call modified wattle fences. They were propped up in the primary direction of winter storms. These fences are used to stop drifting snow.

In Illinois, we decided to bypass Chicago and head south of I-80. The car’s navigation system directed us to many extremely straight highways that took us past farms with signs displaying the family farm name, but nothing announcing what animals they were raising in the long corrugated metal buildings. Buildings with large exhaust fans and no windows were probably chicken farms (though they could also have been pig farms). I never caught a telltale odor. In Southern California, we saw thousands of cattle in feed lots with nary a blade of grass – beef being “finished off” with grain before slaughter. Throughout the West we saw cattle on green pastures, cattle in arid areas eating scrub growth. Many cattle and just a few sheep.

It’s good to be home in the hills of Nelson, where we never know what the weather will be from minute to minute.

Pecan trees, New Mexico. A quick search of the internet shows that the southern portion of New Mexico produces a majority of the nation’s pecans. Pecan trees are related to the hickory tree! Irrigation by flooding between trees. 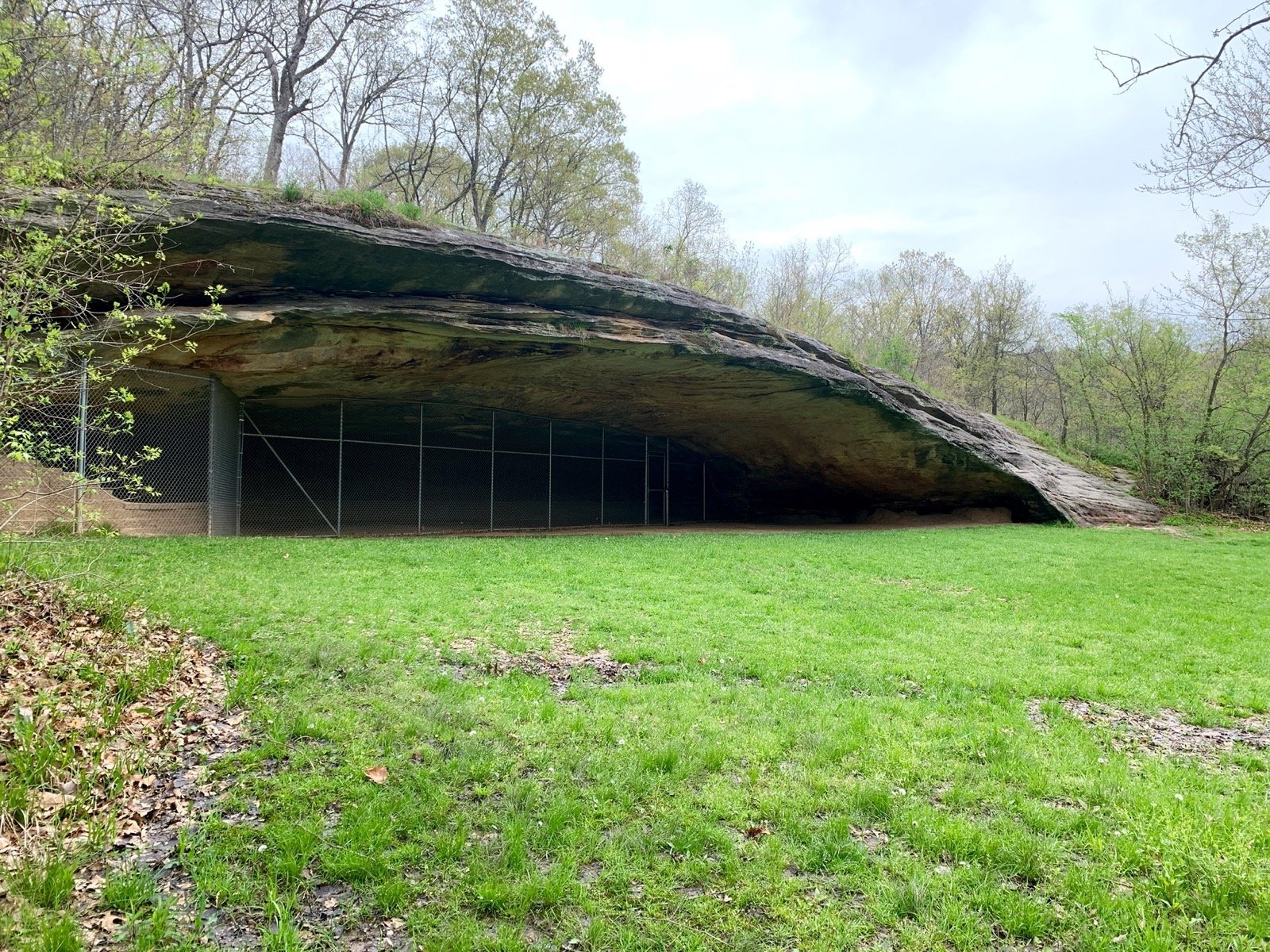 Graham Cave, near St. Louis, Missouri. This property was purchased in 1816 by Robert Graham from Daniel Boon’s son. The cave was used to shelter hogs sometime after 1847. Years later artifacts dating back 10,000 years were found in the cave. 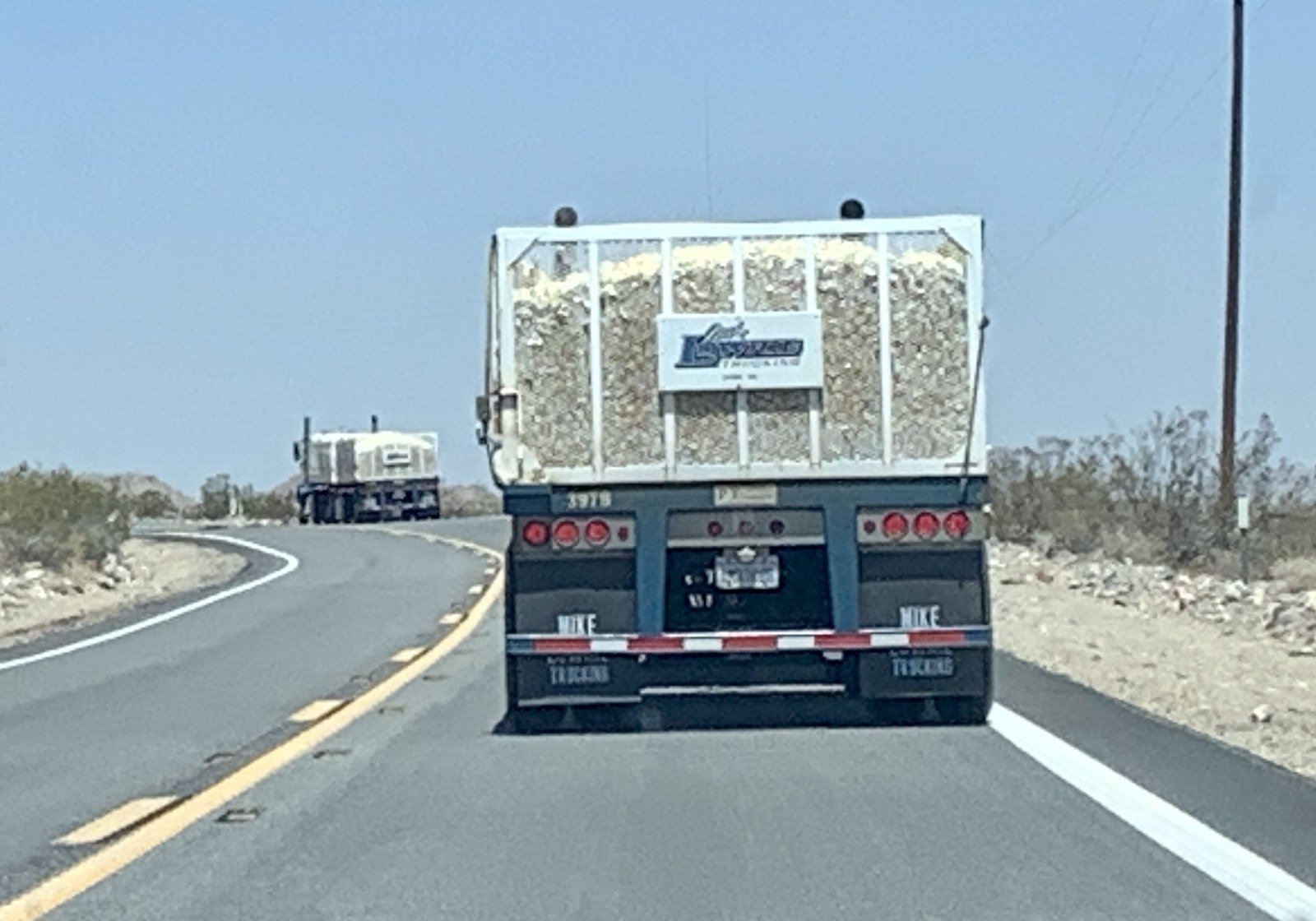 Tractor trailers filled with garlic in Southern CA in mid-May! 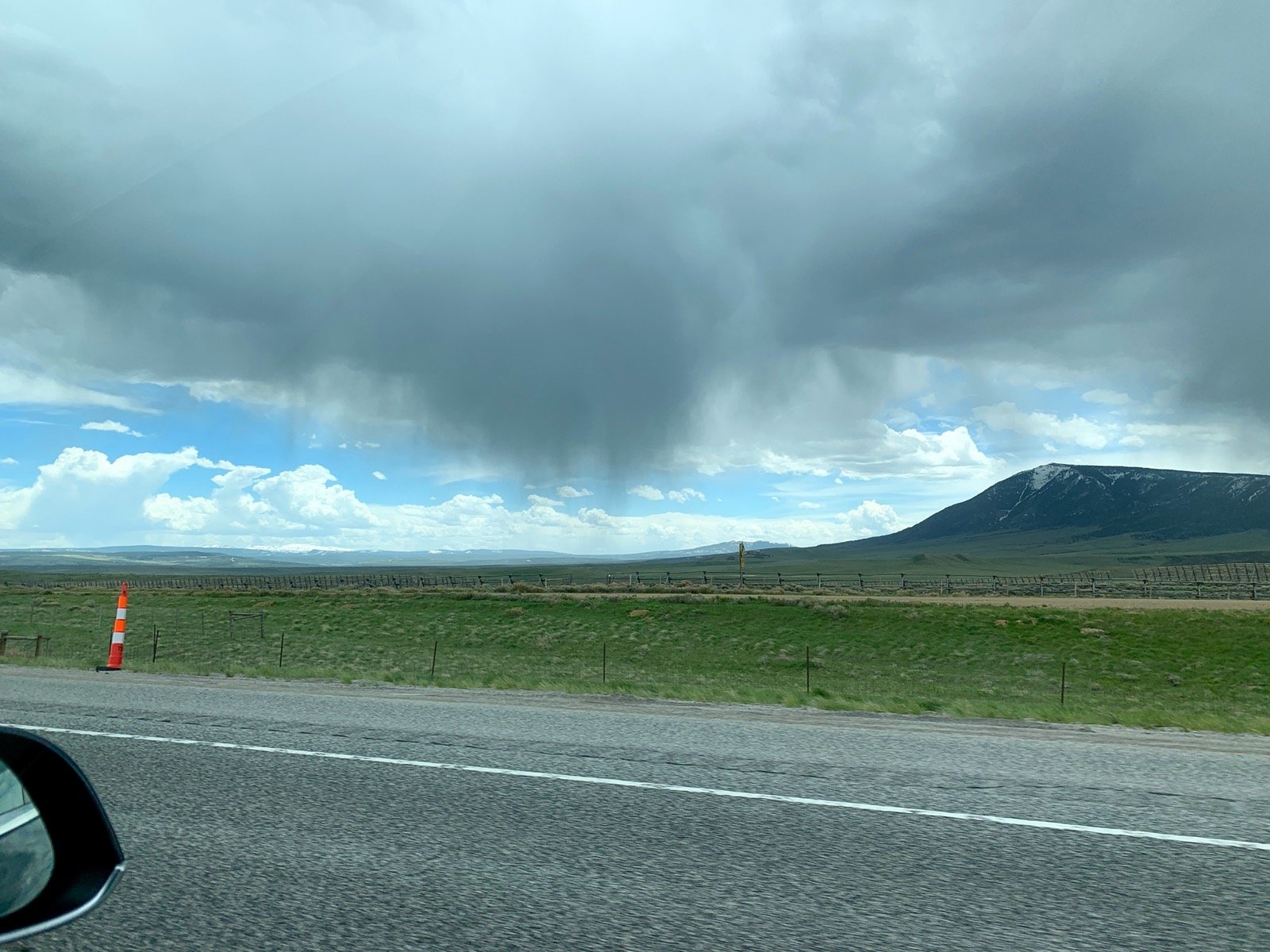 Rain in the distance in Wyoming, note snow in hills on May 29th!

Wattle Fencing along the roadside in Wyoming. 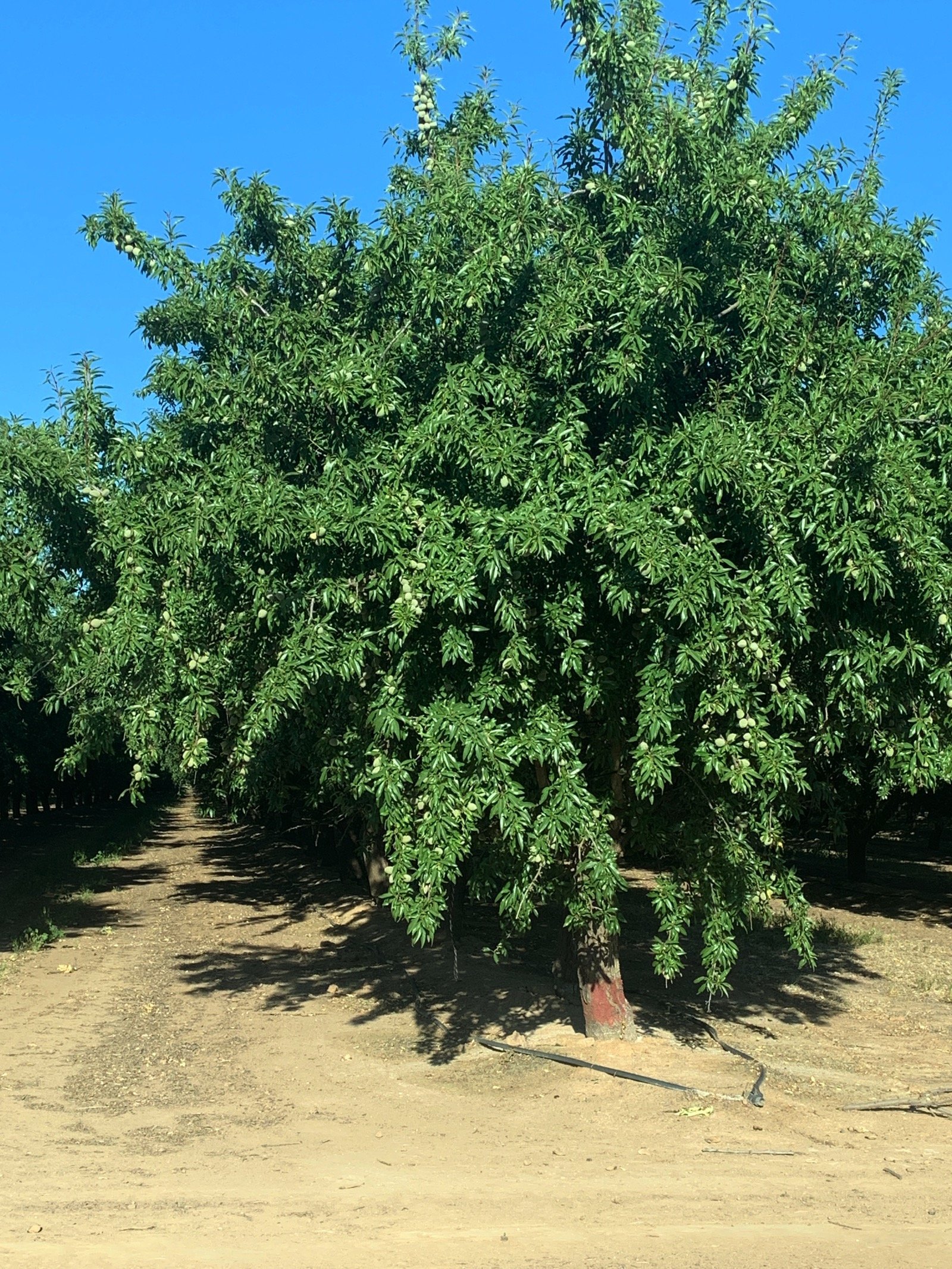 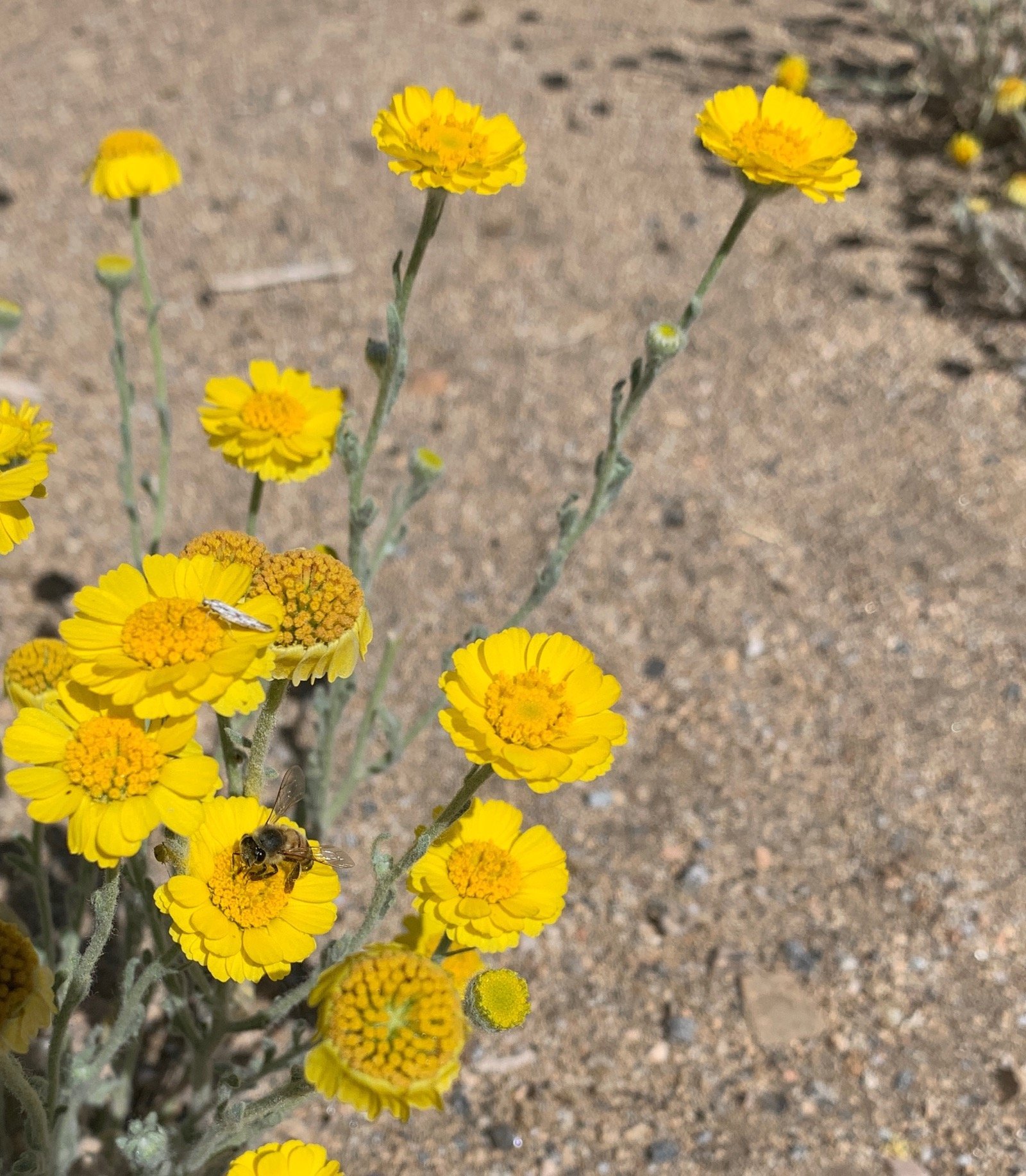