Fishing for an Answer

Fishing for an Answer 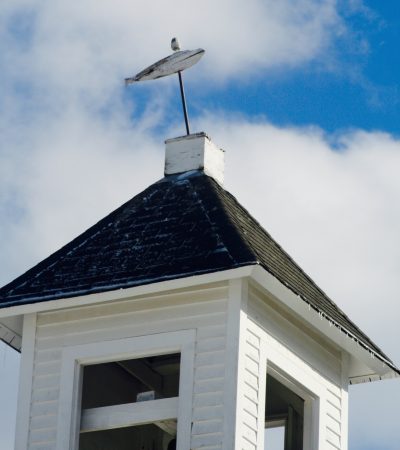 I was at the Town Hall on voting day and our esteemed moderator, Lew Derby, pointed out the window to the weather vane that sets atop the Brick Schoolhouse. We saw what appears to be a fish. Lew is an avid fly-fisherman, so I had no reason to doubt his observation. Though it must have been there for many years, I had not noticed it before, and Lew had just recently paid attention to it. What was the meaning behind it – how did it figure into the design of the building?  Initial inquiries with the local cognoscenti yielded no information (I even asked Barry Tolman, who went to school there), and as we know, when there is a vacancy of knowledge, theories propagate.

I considered the possibility that the area of the Schoolhouse, and much of the rest of Nelson, was once submerged. This would explain why the initial settlement of Nelson (then Monadnock Number Six, and later Packersfield) occurred at the higher elevation – up where the cemetery is. But further scrutiny showed that this theory didn’t hold water.

Rick Church suggested that there was always something fishy about Thomas Packer’s promise of free town land, so Breed Batchellor (an early settler)  had it placed somewhere (later to be installed on the Schoolhouse) as a rude gesture. The mention of Batchellor then reminds us that he himself became reviled when he took a stand as one of the few supporters of the King. We know from historical accounts that he was run out of town – and we can surmise that his revolutionary persecutors stuck a dead fish on a stick as a means of moving him along without doing mortal harm. In any case, Batchellor eventually moved to Canada, where he fell out of a boat and drowned, so he ultimately was swimming with the fishes.

As history progressed Nelson became a sheep town, and at about the time the Schoolhouse was built, there might have been a movement to install a sheep weather vane. But sheep are notably lacking in aerodynamic qualities, so this idea might not have flown (as it were). In any case, who wants to be downwind of a sheep?

Things became more complicated when someone suggested that maybe perhaps it was a whale instead (it could  possibly be perceived as such). A more logical explanation then emerged. Henry Melville, an important benefactor and resident of the town (who lived in the house up the hill between the village and the cemetery) was a relative of author Herman Melville. He may well have donated the device in honor of Captain Ahab’s nemesis, Moby Dick. Of course everyone knows that Moby Dick was a white whale, but decades of weather may have deteriorated the original sheen of the whale’s representation. 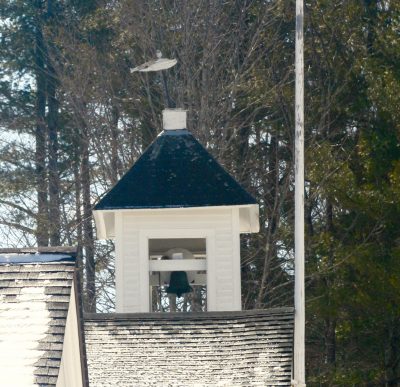 One particular feature of this weather vane is that the rod on which it is mounted is bent and sets at a slight angle. This could be suggestive of a harpoon, though it also could come from an early effort to make Nelson a tourist mecca by imitating the leaning tower of Pisa.

As it turns out, I learned that fish weather vanes are not really rare – a quick search of the Net comes up full.

So perhaps there be an opportunity here to extend Nelson’s piscean legacy. Truly the current object is quite weathered (as well as the aforementioned bent rod). Might a replacement be made by one of our talented local craftsmen? For now we’ll just put this idea out there, and see which way the wind blows.