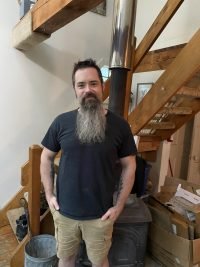 Geoff Williams moved to Nelson on his first birthday, in 1982. That makes him almost a native. When his parents, Elizabeth Williams and Mike French, bought their home off of Log Cabin Road, there was, in addition to their house (where they still live), a foundation that had been poured. Eventually a second house was built there, and that — a stone’s throw from where he was brought up — is where Geoff lives today. Except for a short-lived foray to the Pacific Northwest, Geoff has always called Nelson home.

He describes growing up in Nelson as a great place for imagination. With limited TV time, no mobile devices, and plenty of woods and quiet roads where you could walk unsupervised to your best friend Owen Iselin’s house, a mile or so away, and even return home in the dark. As a student at the Nelson School, Geoff is remembered for his flawless recitation of Lewis Carroll’s Jabberwocky, which demonstrated both an enthusiasm to share something fun and interesting, and a confidence in performance. At around that time he started piano lessons. In Middle School he took up the saxophone, and enjoyed playing in both regular and jazz bands. He also tried guitar, but it didn’t really take hold until he was around 15. By then he had a great palette of instruments to work with, and also was getting exposed to the music that would shape his musical life. At the age of thirteen he had (with his Dad) attended what would be one of the last Grateful Dead concerts before the passing of Jerry Garcia: Highgate, Vermont, 1995. He describes coming off the exit and thinking he had stepped into a Dr. Seuss book. 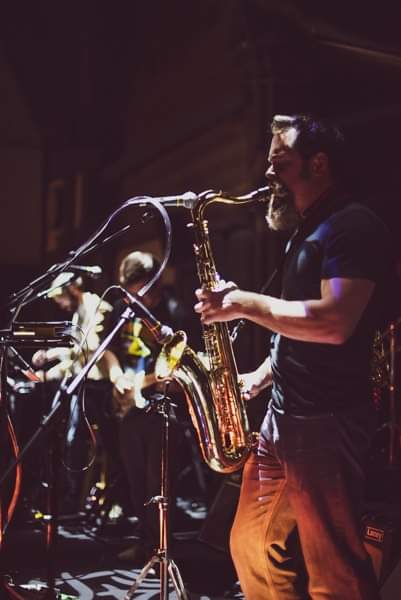 While Geoff developed, and has retained, a repertoire of solo material, his primary passion is playing in bands with the opportunity for improvisation — seeing where the journey takes them, “letting the music play the band.” He’s devoted significant time and resources to developing bands that work with material from the Grateful Dead and Pink Floyd.

Echoes of Floyd was originally called Space Force, but they changed the name early last year to make the brand a little more obvious and more easily marketable. Echoes of Floyd tries to stay true to the album recordings, but looks to live versions when compromises need to be made due to limitations in personnel. “We sometimes apply a Grateful Dead approach when it comes to playing a different sequence of songs each time we play, or in how we medley some songs together,” Geoff explains.

Wolfman Jack attempts to recreate the sound and style of 1967-1970 Grateful Dead with players dedicated to specific band members and their specific role and playing style of that era. “We study specific recordings of the era as they learn each song, but we don’t attempt to recreate specific performances.”

Many of their performances are at outdoor events, which meant that this past year, when so much music was cancelled, they were still able to play occasionally. This has led to an interesting development that at least in one recent case resulted in a big night’s work.

Geoff describes his band’s Grateful Dead experiences as functioning like a Dixieland band: each member of the band has to have a solid grasp of rhythm and harmony, but then each does their own thing.

As a day job, Geoff works for New Chapter, a Vermont-based wellness products company, where he is involved in many aspects of the production process. He loves his job, but also values the fact that it is not the kind of job that requires after-hours attention: he can leave his work there at the end of the day, and put his energy into this music.

And Nelson is where he still finds nourishment. He uses the term the “Sound of Nelson,” not to refer to a particular genre, but rather the awareness one gets, having lived here a while, of the rich musical environment fueled by contra dances, Apple Hill, Monadnock Music, the Monadnock Folklore Society, and the many individual musicians who live here. The creative community. 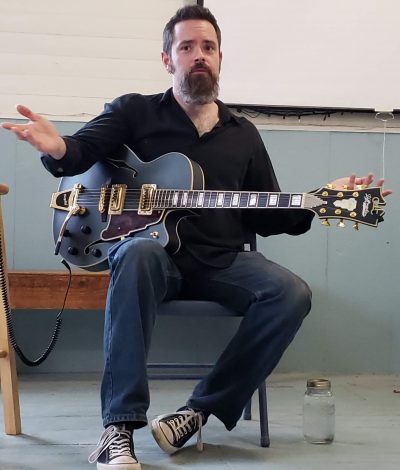 In the Nelson Town Hall

While our visit with Geoff to gather information for this story lasted only an hour, his enthusiasm could have extended the conversation to an eager listener for a lot longer. He talks about his own originals, about his pursuit of jazz and classical music, and most recently about providing some instrumental and vocal backup for the music of Jess Hutchins, another Nelson musician who we hope to profile this fall. His comments are laced with an almost academic detail of professional observations, coupled with a nod to the seemingly unrestrained spontaneity that only a truly disciplined musician can risk. 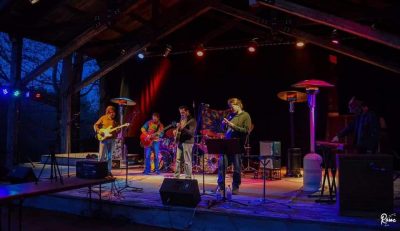 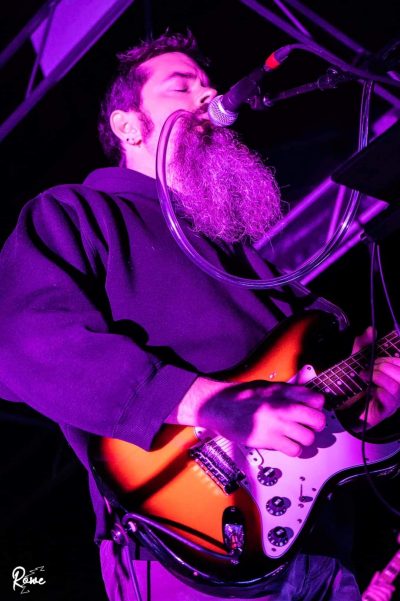 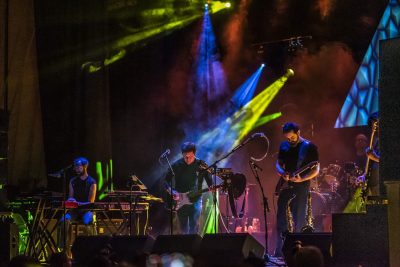