Intro to the Nelson Cookbook

Intro to the Nelson Cookbook 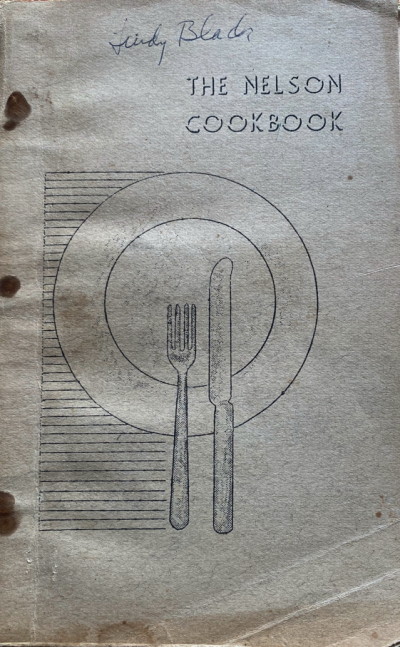 Quite likely some, who thumb through these pages, may wonder about this place called Nelson.  This is a tiny hamlet, riding high and handsome astride the divide which separates the Merrimack and Connecticut watersheds. The village lies in a sort of eddy between the currents of motor traffic flowing along Route 9 on the north and Route 101 to the south, while directly above is the invisible radio beacon which directs the giant stratocruisers along the skyway connecting Chicago and Detroit with Europe and the British Isles. Compared to other New Hampshire towns, Nelson rates among the highest in elevation; among the lowest in human population. She is long on highways but short on places of business, In fact, Nelson today is sort of a residential district at large, which relegates such enterprises as stores and theaters and filling stations to neighboring towns. While they sell butter and eggs and gasoline, she sells the secluded camps and woodland lakes and pinnacled peaks vacationers seek. Her greatest asset is not for sale. Through the years industry and the professions have lured sons and daughters out of Nelson, but they can’t take the love of Nelson out of them. Ingrained is an urge to return to this native soil, to spend their vacations living in pantomime the traditional ways of their ancestors. This book is dedicated to one phase of that life — food.

150 years ago Nelsonians obtained meat from the forest, or from their flocks and herds; fish from the lakes and streams, corn and rye from grain they raised and had ground some twenty miles away. Sweets came from the maple groves, vinegar from the local apple orchards, most of the flavoring was free for the picking. Salt, soda, spices and choice items of food were laboriously packed overland from coastal towns. Those were pioneer times.

What a thrill Nelsonians of the next generation must have had as they gathered at the Melville Store, near the cemetery, to see the first Boston stagecoach top the rise over Wilson (Hardy) Hill, and then pick up speed in the last quarter-mile as the straining four-horse team hauled the lumbering coach for an impressive first stop in Nelson, before continuing down the hill past the red house (Neil Tolman’s) and along the old turnpike road towards Stoddard. Thus was ushered in the first direct contact the little village had with the outside world. From bridle paths which served for the transport of only the simplest foods came wagon trails over which horse and ox-drawn carts  brought such luxuries as molasses, kerosene for lamps, cook stoves, sugar in 50-pound lumps, a variety of kitchenware and dishes.

The coming of the railroad [to nearby towns] only shortened the hauls. Today as we roll along over those same hills in our gasoline-powered, modern, Aladdin-magic-carpets, one should feel pity for those so depleted in stamina that they do not have some regrets for being born a hundred years late.

If, by the hand of Providence, you had been a Nelsonian of 1850 instead of 1950, you would have probably owned some of the 5,100 maple trees being tapped each spring, and a varying number of the 5,000 cattle, sheep and pigs. Your home-grown grain would have been ground at the gristmill in either Harrisville or Sullivan. Every day except Sunday you could have expected one or more of the twenty-six odd peddlers, operating out of neighborhood towns, to stop at your door with an assortment ranging from tinware to safety pins. There were also peddlers of fruit and peddlers of fish. If you did not belong to the newly-formed Temperance League, you might spend the weekend at Rob’s Tavern in Stoddard, or patronize the dozen or more saloons in Keene, or go all-out at the distillery in Walpole. There was a general store at Nelson center, another in the west part of town (Munsonville), and one in Harrisville. There were sawmills, cider mills, makers of woodware, but most men farmed, in varying degrees. There were stages to  Keene and the south, to Dublin, and the east, to Hancock, and the north. In those days people came to trade; now they come to town for a rest.

Some say that Nelson has become a ghost town. Lilacs and old roses guard her cellar holes, brambles and bushes clog her pastures; former potato patches are now pine forests; the store and the hotel sleep beneath the greensward; her cemetery is filled to capacity. The forests and modern way of life are doing a pretty good job of burying a glorious period in the history of Nelson, leaving only inspiring traditions, rich as the mellow afterglow of a summer sunset. We should not grieve because Nelson is being reclothed in her ancient costume of forest primeval. In the world today, it becomes her better for the role she has to play. She has put away the luxury of provincialism in order to display her most attractive charm — natural simplicity expressed in rarely matched beauty.