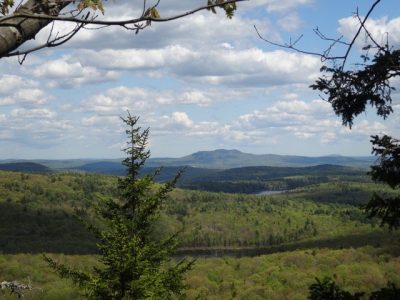 The Kulish Ledge Trail was built nine years ago by the Nelson Trails Committee. It starts on Old Stoddard Road three miles from Nelson Village and climbs 2.1 miles to the summit of Osgood Hill. Clearing some large blowdowns with Dave Patek there a few weeks ago, I found myself reminiscing about this lovely piece of Nelson woods. I thought about the beautiful things I’ve seen and the fun I’d had with so many people.

Building the trail required crossing Bailey Brook. The brook cascades over rocks and boulders – a rock-hopping adventure when the water’s low, but dangerous when the rocks are wet or icy and the water is high. Exploring the brook, we found the stone abutments of an ancient crossing, and Dave Birchenough designed a 20-foot-long footbridge above a pretty cascade. Using old telephone poles for supports, Dave Patek, Tom Murray, Maury Collins, and I joined Dave B., spending two full days that October building it. The high point of the experience came when our team devised a way to get the long, heavy poles across the brook using an elaborate system of cables, pulleys, and winches. 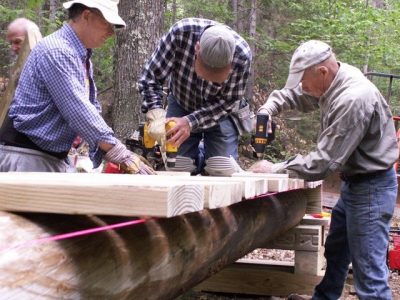 The trail crosses a smaller branch of Bailey Book about half a mile beyond the big bridge – easy enough to cross for those with youthful balance and rock-hopping skills. We decided it also needed bridging. This time we made our bridges from an oak tree cut on-site by Dave Patek, and split by me using skills I learned in my college outing club. It was fun showing off my talents. (My parents thought I was studying history.) It was deer season, and a hunter from Massachusetts was surprised to meet a work party of eight orange-clad people building a bridge in the middle of the woods.

Kathy Schillemat recruited a group of volunteer professional trail builders called the Jolly Rovers from Brooklyn, New York, to come to Nelson to teach us how to build good trails. They were tattooed and bearded – sort of the Hell’s Angels of trails guys. Under their guidance, about 10 volunteers built about 100 feet of trail, using mineral soil dug on site. It took most of a day. That remains the most professional part of our entire trail system and we haven’t built any more like it. 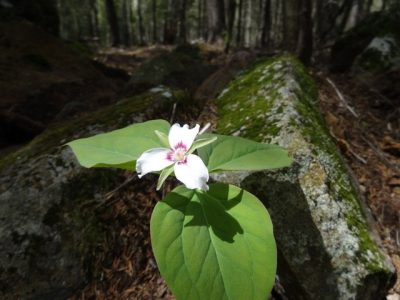 Everyone loves the view from the East Pinnacle over Spoonwood Pond, but my favorite sights are the spring flowers – star flowers and trillium being my favorites. Al Stoops added greatly to my enjoyment by telling me that the flowering bushes framing the view at East Pinnacle were called serviceberries (see back cover) because they were the first flowers available to adorn the graves of early settlers.The trail has been treated with respect by hikers. Rarely do we find litter. One year someone did spray fine lines of colored acrylic paint on the rocks at the ledges. I went out to clean them up one bright Sunday morning with a blow torch and a wire brush. An hour and a whole tank of propane later, as I was finishing up, Bill Dunn, a friend, and their sons arrived. Bill opened his pack and awarded me a cold beer for my efforts. That was the highlight of the many times hikers have thanked me and other Trails Committee members for our work on the trails.

In 2018, the Trails Committee built a companion to the Kulish Ledge Trail, named the Holt Trail in honor of two 19th century farm sites settled by father and son, Daniel and Thomas Holt. I especially remember excellent brush-cutting work by Val Van Meier, Elizabeth Williams, and Brenna Kucinski. Al Stoops’s trail layout took us through thick stands of young spruce and right through middle of several tangled blowdowns. These were no match for Steve Kucinski and Dave Patek with their chain saws. It was a long way home with my heavy saw and I swallowed my pride and accepted Brenna’s offer to carry it much of the way.
In the subsequent years I have hiked the trail many times, but my favorite hike was one I took with my eleven-year-old grandson, Henry, in 2019. We hiked the 4.2-mile Kulish Ledge-Holt Trail loop. My mission that spring was to measure distances along the Kulish Ledge and Holt Trails for a trail guide and signs. Henry was an enthusiastic hiker and took special delight in finding bright orange salamanders. It must have been just after a rain and there were lots. I could hear him counting them behind me. “Forty-one, forty-two, forty-three ….” As we descended Osgood Hill via the Holt Trail, I heard, “Watch where you are stepping, Pop. Number forty-four was dead.” That put a big smile on my face. 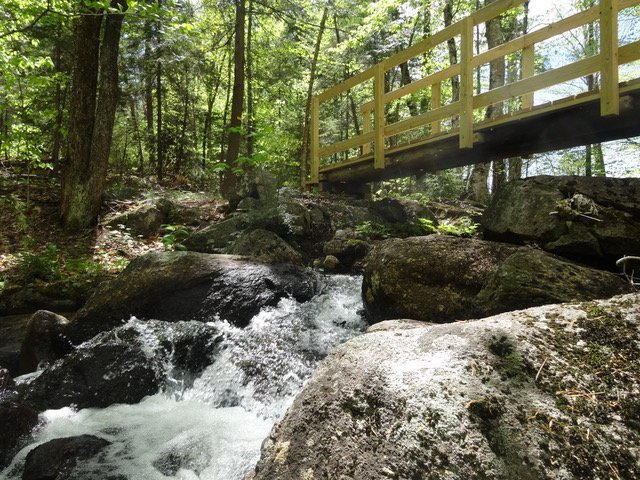 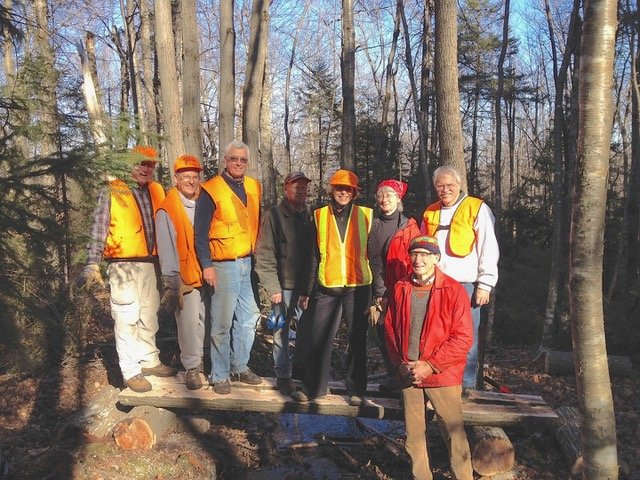 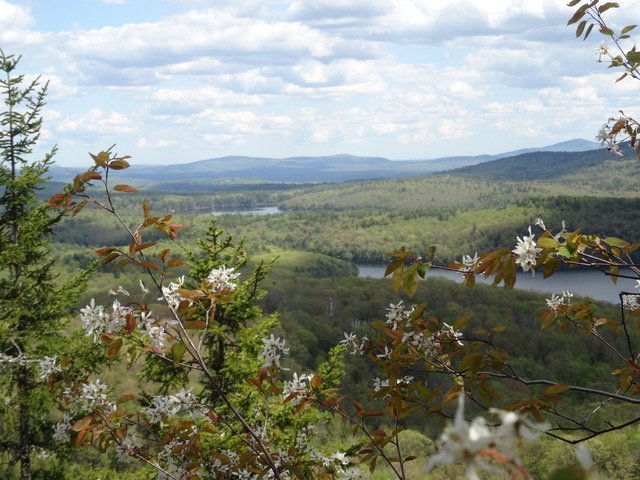 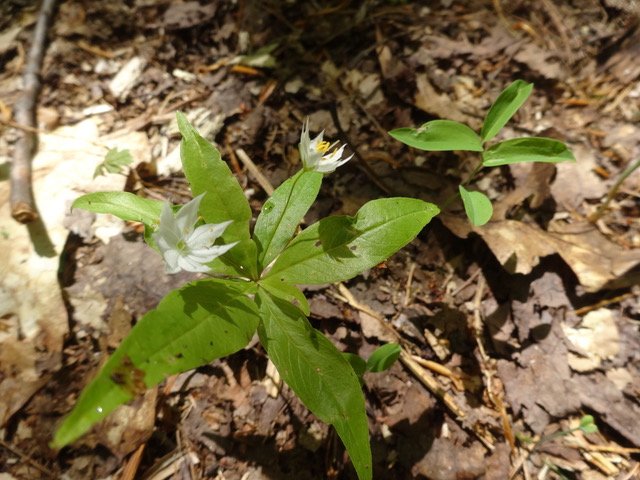 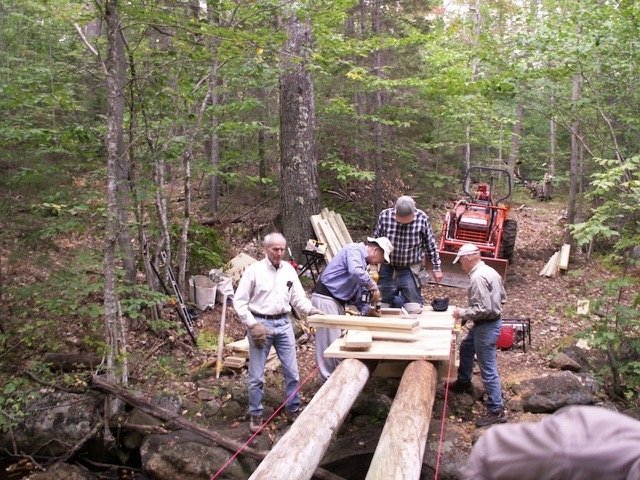 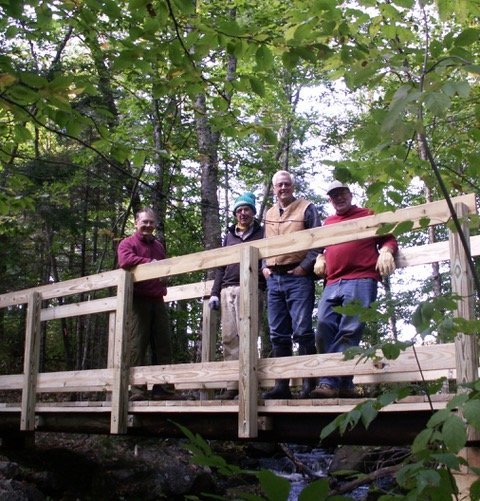 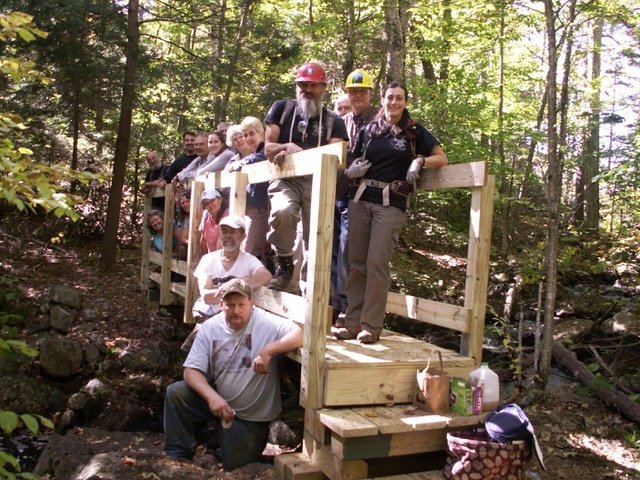