Librarians Past and Present

Librarians Past and Present

This article is adapted from the October, 1985 issue of the Grapevine-2, Nelson’s community newsletter at the time. It has been amended to make it current.

There have been many librarians over the years at the Olivia Rodham Memorial Library, and a few of them deserve special mention:

Delia Osgood was not the first librarian, but served as librarian when the library was in a corner of the Town Hall. Delia lived where Betsy Taylor [now Andy and Sarah Wilson] lives, and she and her husband were both very active in Town affairs.

Ida Holbrook served from 1926 to 1934. Ida lived in the red house across from the church [currently Bert Wingerson’s house].

Myra Hardy was librarian from 1960 to 1971. She had worked for many years as a trained librarian in Georgia and Vermont. She retired to Nelson and lived with her sister, Bessie, in the house where Henry Putzel [now Val Van Meier and Tom Buttrick] lives, which used to be the parsonage. The memory of Myra trudging through the snow to and from the library is fresh in many of our minds even today.

Kay Upton, daughter of our own Rev. Mary Upton, served for the interim between Myra Hardy and Patty Packard. It was Kay who started having the Library teach a course to the sixth graders in Munsonville School. This innovation has continued to the present time. 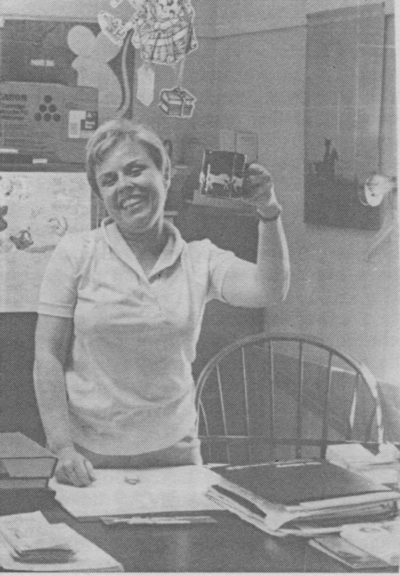 Patty Packard, who lived in Chesham,  became the Librarian in 1972. You might say that Patty was the first “out of towner” to be librarian in Nelson, but we all think of Patty as “one of us.” Patty and her friend Monique (poodle) were a welcome sight for all of us who attended the library.

Patty started some innovations of her own:

• The taking of books to Munsonville School [now Nelson School, but the same place] to supplement their own school library.

2021 update: Patty is still well-remembered by many here in Nelson, and she was especially beloved by children. We were devastated when she developed cancer and was forced to retire early.

Our current librarian, Kris Finnegan, already lived in Nelson, and was teaching at the Peterborough Middle School. She had wanted, since the age of 8, to be a librarian. She was able to step into this position (1991), and was able to track herself towards standard librarian credentials. Her creative development of children’s programming follows the inspiration that Patty provided. In 1997 she oversaw the move from the Old Library to the New Library (a day of kids pulling wagons loaded with books across the road). In 2012 she was honored as New Hampshire  Librarian of the Year by the New Hampshire Library Trustees Association.