Loon on the Loose 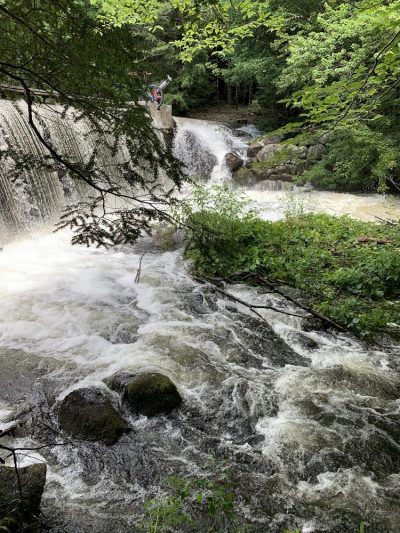 Having started from Spoonwood Pond and Nubanusit Lake in Nelson, water flows from Lake Skatutakee, on it’s way to the Contoocook (Peterborough), which joins the Merrimack (Pennacook, just north of Concord), which then flows into the Atlantic Ocean at Newburyport, MA.

Wednesday afternoon July 14, Dave Birchenough (the dam man) and Judi Lang were out for a ride looking at downstream (from Nubanusit Lake) water levels and dams. At the Harrisville bridge crossing over the water rushing from Skatutakee Lake to the lower pond (Lower Pond, or, invertedly Lake Skatutakee) we watched an adult loon desperately trying to convince its 2 little chicks to follow against the flooding waters, to swim under the road to larger Lake Skatutakee. The adult loon would coral the chicks and then dive against the current and cry its heart out to convince the chicks to follow. Loon chicks can’t efficiently dive and swim until 8-9 weeks. As hard as those little chicks tried to swim on the water they could make no headway. The water flow was just too strong for their little feet. This scenario was repeated over and over and was heartbreaking.

Moving downstream from the road bridge the dam’s waterfall roared down over the 12 feet and waters continued pushing hard over and around the brook edges and trees. We parked at the foot trail bridge, about 400’ downstream, and stood in its middle to survey the waters. Looking northwest, back towards the water’s source, in the midst of turbulent Nubanusit Brook was another adult loon. That loon was desperately trying to head upstream back into the lake, diving under only to come up and float pretty much the same spot it initiated its dive. At times the loon would pull over to a side pool for a very quick rest. It was clear the loon’s fate was similar to Sisyphus, only its fate would have a hopeful ending.

Upstream, it would never make it back up over the waterfall. Downstream about 5 miles to MacDowell Reservoir would be its next best opportunity. Loons need a considerable water runway, up to a quarter of a mile, to get enough lift for takeoff. Not good considering it would continuously try to torpedo swim in the opposite direction to its family.

Adult loons can’t really walk on land because their legs are located far to the rear. They push across the land only to nest, that being the only time they are on land, out of water. This is another reason that consistent water level is so very important during nesting season. Both Spoonwood Pond and Nubanusit Lake and many other lakes lost their nests this 2021 year for this reason. So there was no way to walk away from the waters by this desperate loon.

Dave and I knew we had to get a call as soon as possible into the biologists at The Loon Preservation Committee (see the note from them in this week’s news).
We left the bridge leaving another Harrisville resident watching and came home to call Mary Caffrey, the biologist for our lakes. About an hour and a half away she called a colleague to take watch until she could get there with her 15’ net. By that time the loon had been swept further downstream and try as they could in the high and fast waters before another thunderstorm hit, they could not find the loon. The next day some volunteers went out. Thursday night we finally received this hopeful email message from Mary at The Loon Preservation Committee:

“Just wanted to check in with you and tell you that a couple of my volunteers found the loon alive! It was pretty amazing and the only reason they found it is that it called out while they were looking for it. We were able to catch it and bring it to a rehabber. Hopefully, it is not too injured from its impromptu rapid ride and we will be able to release it back on the lake.”

Considering the difficult year for loons on the water we are all glad to have been a wee part of saving the loon. And by the way, the news is that the rest of the family, the two baby chicks and an adult under the bridge, have moved to the main lake and that parent loon is doing their best to feed and take care of their chicks. Hopefully, they will keep doing well so they can be reunited with the rescued adult.

And now – see the happy end of the story!

From the Loon Preservation Committee Newsletter

On Wednesday, July 14th, we received a call at the Loon Center about a loon in distress on Lake Skatutakee in Harrisville. After multiple days of heavy rain, the lake level had increased, creating a current that washed the male loon of the lake’s breeding pair over the dam and into Nubanusit Brook below. The loon had been swept roughly a quarter of a mile down Nubanusit Brook, and the caller had found it sitting in a relatively calm spot of water near a bridge on the East View trail. Unfortunately, water levels in Nubanusit Brook were high, and the loon was out of reach and surrounded by heavy currents. While LPC biologists Elaina Badders and Mary Caffrey gathered the necessary equipment for a rescue, we called Brett Amy Thelen, Science Director at the Harris Center for Conservation Education, to see if she could keep an eye on the loon until Mary and Elaina arrived. Brett enthusiastically agreed, and within 15 minutes she was on site watching the loon.

The Monadnock-area biologist for the Loon Preservation Committee reports that both the Nubanusit nest on Blueberry Island and the Spoonwood nest have failed. 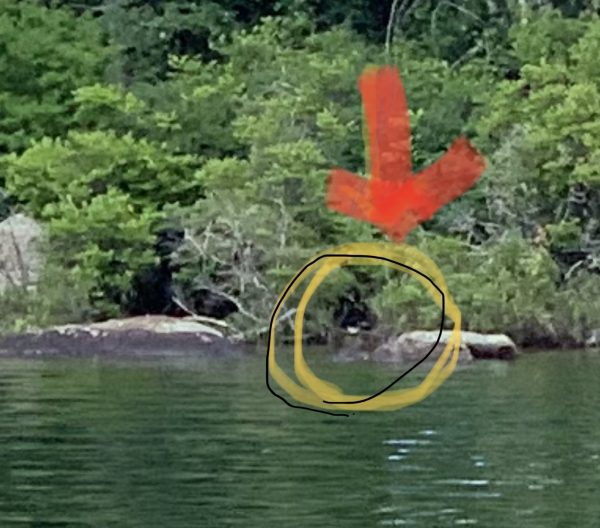 The Nubanusit nest sits on the southern shore of the island. In the photo above, taken well before the massive rains, the egg can be see as a white dot under the red arrow.

While loons can try a second egg if the first batch fails, the biologist suspects it may be too late in the season to hope that happens this year.

The annual state-wide NH Loon Census is scheduled for July 17th, 2021. Volunteers from the Nubanusit Lake Association will be counting the local loon population at the same time as like-minded loonies around the state. In 2020, there were 313 loon pairs in New Hampshire with the count slowly rising from 296 and 309 in 2018 and 2019, respectively.

Travelers from Nelson to Harrisville and Chesham may have noticed a strange device floating in the northeast corner of Child’s Bog. No – this not a small nuclear reactor! It is, in fact a loon nest raft. Yes, this is a thing! Read this to expand your knowledge of loon nest rafts. 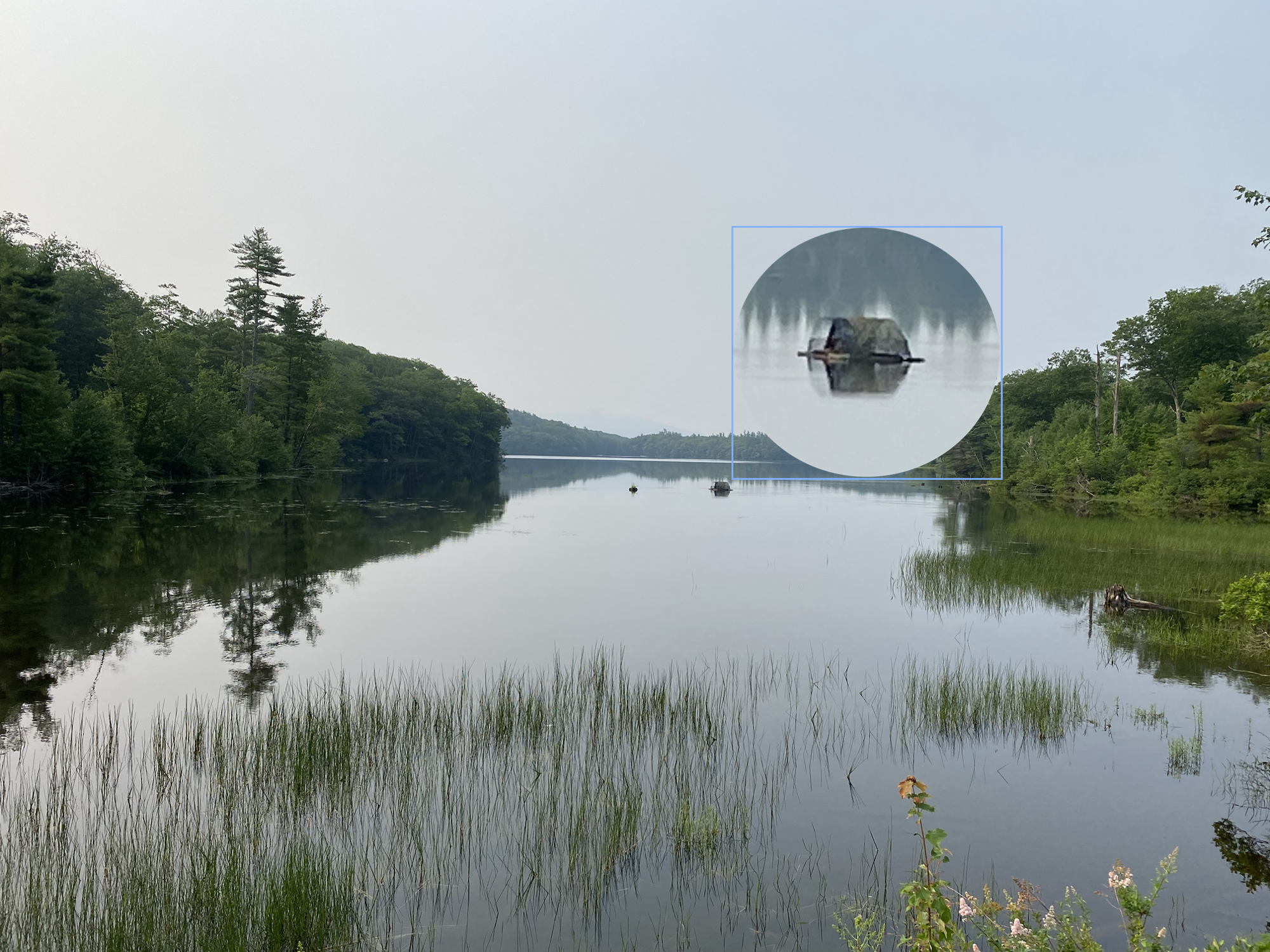 Here is an excerpt from Mary Caffrey’s letter introducing herself: sent out at the end of May.

Our Loon Preservation Committee field season officially got underway this week. My name is Mary Caffrey and I am the new field biologist for this region for the 2021 season. This is my first year working with loons, but I have lived in NH all of my life and am very familiar with the wildlife of our amazing state. Before this season I spent years working with the song birds that migrate down south every year, and while I loved that work, I am excited for this new experience! I look forward to being in touch with you individually as I begin my surveys.

Please let me know as you observe the following key events: pair return/presence in April/May, nest initiation, net hatch or failure, and chick survival to mid-August. Other urgent reports that we would like to hear about immediately include dead or injured loons, or the need for nesting signs on your lake. Feel free to send any other updates throughout the field season, and pictures or video are especially helpful!

Thank you so much for all of your help and continued effort on behalf of the loons in your area, we would not be able to do our great work without your help!

You can reach me:  monadnock@nullloon.org

I look forward to meeting you (or seeing you again) soon!

The Loon is Rescued! 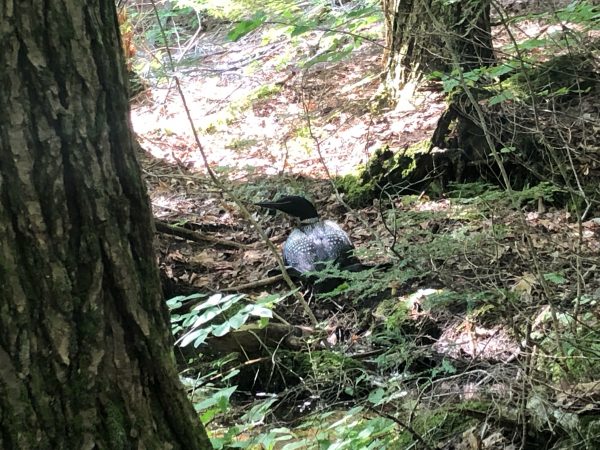 The loon where it had beached along Nubanusit Brook. 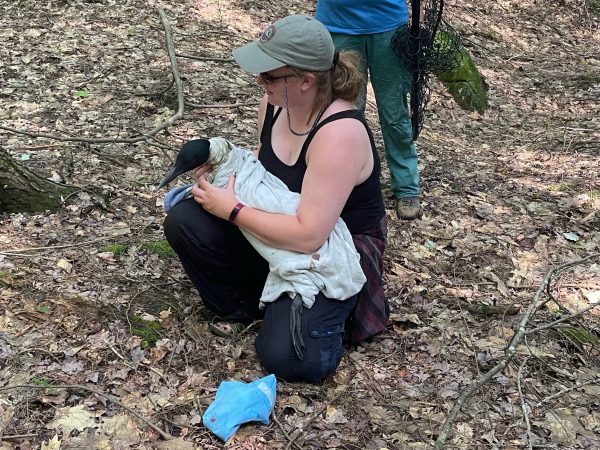 Mary preparing to carry it back to the car for transport to the wildlife rehabilitator.

The loon was released back on Skatutakee Thursday (7/16)  afternoon, where it reunited with its mate and chicks. 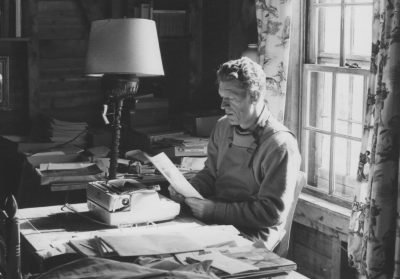 Our Loons Are Always Laughing is the name of a book of essays from Newt Tolman. The title comes from a reference in the first essay, a cynical poke at bird watching.

Newt’s writing is in an older, somewhat ornate flavor, but still worth reading – it certainly provides insights into the character of our town. Loons, and other book by Newt, are available at the Library.

Not far from here, we have a whole village which is a direct result of the old hired-man system. The place was originally one farm. There were six daughters in the family, and the hired man married the eldest and built nearby. The next hired man married the next daughter, and so on as the girls grew up, until the cluster of houses had grown to seven, with grandchildren adding more.

In this case an interesting genealogical note crops up. After the first hired man had settled down with the eldest daughter, his widower father came to visit; with father took over the son’s former job and presently married the next daughter.

The son of the first hired man thus became the nephew of his younger cousin, son of the second hired man who was father of the first. The second hired man was both father and granduncle to of his own newest son, his older son being his younger son’s uncle as well as stepbrother. He was also both grandfather and uncle to his son’s son, and his wife became her older sister’s mother-in-law. And I believe someone turned out to be his own uncle, but I forget just how.