From 1990 to 2007, Miriam Goodman rented one of Harvey Tolman’s camps on “the mowing.” I was her neighbor.  We were friends and fellow writers in Cambridge, Mass., and we  thought of Nelson as the ideal place for a summer artist’s retreat.  However, soon after Miriam’s arrival, I learned that our ideas of a retreat differed. I was working on a novel.  I rarely showed my face until dinner, rarely invited friends from the city to visit, and was slow to make new friends in Nelson.  Miriam, an accomplished poet, increasingly interested in photography, was out and about constantly, exploring Nelson’s landscape and architecture, and getting to know the town’s inhabitants. Eager to share the wonders of Nelson with her legions of friends from the city – most of them artists of one kind or another – she hosted dozens of them.  Miriam’s shaded porch with its view of the mowing became a sort of salon where you might hear a live  string quartet, or animated discussions by writers and photographer’s critiquing each other’s work. Always a champion of her friends’ artistic endeavors, Miriam took great pleasure in the alchemy that occurs when artists gather together.

When we learned that Miriam had a melanoma, her photographer friend Karen Davis and I organized an evening to celebrate Miriam (who eschewed the limelight) by gathering her friends and showcasing the amazing creative output that Miriam’s guests in Nelson produced.  Several Nelson inhabitants made the trip to Cambridge for a memorable evening.  This slide show commemorates that showcase.  Miriam died in 2008 but the creativity that Nelson inspires continues. 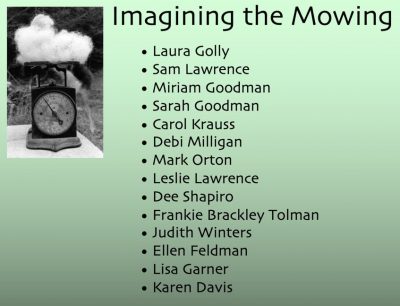 (195 slides- you may want to have several sessions)