Nelson History…can you dig it?

Nelson History…can you dig it? 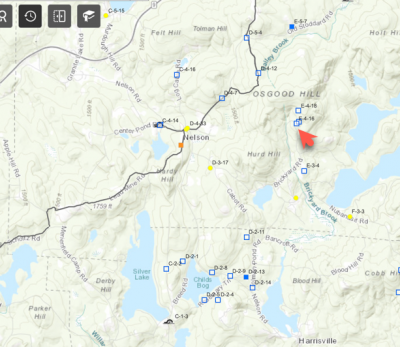 Nelson In 1773. Ithamar Smith’s house is indicated by red arrow. From the interactive roads and cellar holes map at NelsonHistory.org

During the February 2022 school vacation, we were lucky to spend a week in Philadelphia visiting friends and museums. We visited Old City and took in the Museum of the American Revolution. As we were reading about the history and looking at all the incredible displays, I made many connections between the American Revolution artifacts in the Museum and some of the same artifacts that I have unearthed with my metal detector on old homesites in Nelson and Harrisville.

We moved to Nelson in 2001, buying land from the late Ethan Tolman in 2003. Many properties around ours have cellar holes, and I had always wished we had one on our land. My family and I spend a lot of time exploring the woods around Nelson and enjoy looking for cellar holes. I’m in awe of how much effort it took to make a cellar hole using just a shovel while moving and placing rocks to make the foundation. Some of the stones are as big as a small car and 200 years later are still standing upright.

I envisioned buying a metal detector when I retired – pulling my socks up to my knees and wearing Bermuda shorts with a tennis visor on my head. I decided that retirement was too long of a wait (for the detector, not the costume) and bought one four years ago. I absolutely love the hobby!

On my way back from metal detecting one afternoon, I was on a section of my property that was not part of my usual route. I was swinging my detector and heard a “beep.” I dug down and discovered a small iron buckle. I was perplexed. Why would there be a buckle in the middle of the woods? I looked closely at the ground, remembering that 200 years ago the land was mostly fields, and then noticed a small rectangular depression about 25 feet away. I walked over to the depression and heard a few more “beeps” coming out of my detector. I dug up some hand-forged nails, usually a sign of a structure built on a spot. Swung again, “beep.” I dug up a pewter spoon. I discovered a homesite on my property. I was ecstatic! 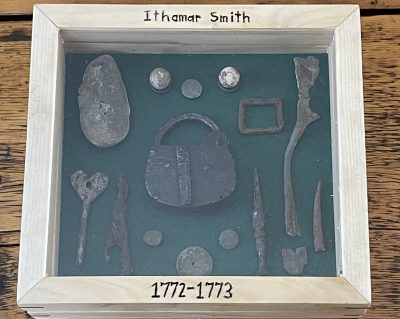 After the spoon, I started hearing all kinds of “beeps.” I uncovered a coin, which was an English King George II half penny. Although I could not read the date, these coins were minted between 1727 and 1760. The coin had a hole punched in the middle, which could be for one of two reasons. One, they would put coins on a string so they would not lose them from their pockets. Or two, they would nail a coin over their doorway for good luck. Based on what I was finding and the landscape, this is likely the site of an old cabin on our property.

Over the next week I found many relics. Two lead musket balls, which by their size, were likely used in a French Charleville smooth-bore musket. This is the same gun the Continental Army used in the Revolutionary War. Some other items were a large padlock, two pewter buttons, a pewter spoon bowl, a pair of small scissors, a tombac button (an alloy of copper and zinc), and a few other iron artifacts yet to be identified.

As Nelson has its own rich history, there are many individuals in our town with a deep curiosity about its past. I contacted Rick Church about my discovery. He agreed that it was a homesite and did some research. It turns out we were not the first people to build a house on our property. A gentleman named Ithamar or Ethjmar Smith, had built a cabin in 1772 and cleared three to six acres of land. He left a year later in 1773. We were unable to find additional information about Ithamar, such as where he was from or where he went, but the traces he left enabled us to further contribute to Nelson’s history and that of Colonial America!

It’s quite amazing to find artifacts that no one has seen or touched for almost 250 years! If you have an interest in the history beneath your feet on your property, I have added a service to my business! Please contact me at bdunn4u@nullgmail.com or call/text at 603-313-3047.