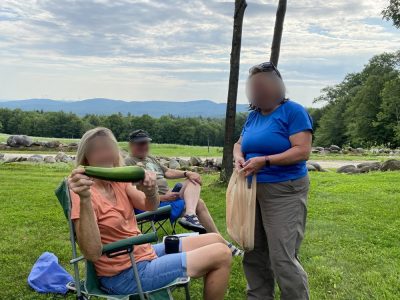 A recent zucchini situation in Nelson. Identity of the perpetrators concealed.

Recently we’ve noticed the New York Times has been using the word “zucchini”. For a newspaper that has impeccably high standards, this is somewhat alarming, and even more so because the word appears, not in the crime section, but actually featured in the cooking articles.

Back around 40 years ago there was the Zucchini Festival in Harrisville, where people would make solar-powered Pinewood Derby style cars out of zucchinis and race them. Other folks did various art projects. There might have been a zucchini toss. Some daring folks even made edibles. Zucchinis have a tendency to grow too big very quickly, at which point they become useless (unless you have sheep or pigs). That’s exactly what happened to the Festival – it was a charming event, and got so successful it became bigger and moved to Keene, and that was pretty much the end of it.

Seeking some specific Nelson reference to this organic matter, we consulted the Nelson Cookbook, compiled by Parke Struthers and published 1953. Looking at the alphabetical index, there is no reference to the Z word. In fact, the last food item listed is under “W” – “woodchuck. We also find no reference to it in the Nelson Zoning Ordinance, for what it’s worth.

Nelson folks do take food seriously. The aforementioned Nelson Cookbook has recipes which might not cause the modern palette to salivate (such as woodchuck), but most of them seem like they could be tasty, and in any case the balance is clearly sweet, vs. savory. In the coming weeks we’ll be selecting more recipes from this book for inclusion on our RECIPE page, Where we’re also adding recipes from readers – we hope you will contribute your own. This week we offer a recipe for amazing baked beans, provided by Judy Waterston, and sampled to the delight of many at a recent pot luck. 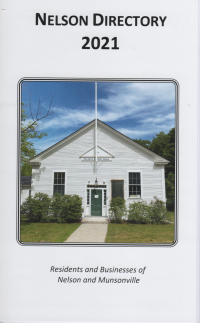 The Nelson Phone Book (third edition!) has been published and is available. Members of the Phone Book Committee will be selling them ($5) on the Common this Saturday, August 21, from 10 – 12. Pick up your copy and be sure to thank them for their efforts. They will also be available at the Town Office (next week), with an honor-system drop box. Side note: There are 45 business listings in this Directory, and 13 of them (the largest category) are under Agriculture. Pretty good for a New Hampshire hill town.

As we mentioned earlier, the originally planned public annual meeting for Nelson In Common has been cancelled, out of Covid concerns. However our Board is still meeting, and we would love to hear your ideas about how this organization can better serve the community in the year ahead. Currently we are providing this web site (supported by The Black Fly Express which alerts people to new content), The Black Fly Quarterly, a print newsletter, sponsoring the Nelson Trails Committee, and financing such projects as the Nelson Phone Book. We are a 501 (c) (3) in the State of New Hampshire. Please pursue the following links for more information.

We are always on the lookout for volunteers to be involved with various projects, including this website. And – we will be growing our Board in the coming year. If you think you might like to be involved, please contact editor@nullnelsonincommon.org.

Finally, another way we can hear from you is for you to take advantage of the Comments function of this website. Most articles have this feature enabled – it’s at the very end of the article, and after any ads that might be there. Just click on the Comments button. You can also share articles through your email or various social media feeds. Spread the word!

A Recipe in Memory of the Ham and Bean Supper

Above: Summer Starting to Pack Up