Nelson is, among other things, a collection of many volunteers who keep the community going in so many different ways. This week we have an update from the Cemetery Board about the development of a new cemetery. The site has been long established (across Lead Mine Road from the current Nelson cemetery), but there are many challenges that come with planning and implementing.

In addition, being on the Cemetery Board means not being afraid to get one’s hands dirty. See some of the work they are doing:

Mouse-over or tap the image below ~ the plot will be revealed! 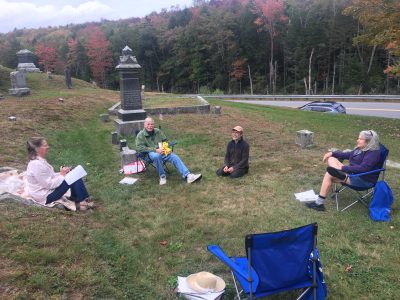 Resting from their labors

Cemetery Board members Laurie Smith, Harry Flanagan, Al Stoops,  and Board Chair, Elaine Giacomo repose in the Munsonville Cemetery. Linda Cates is behind the camera.

We would be remiss if we did not mention the boom that occurred late Sunday morning (it even made The New York Times!) . As we go to “press” this still remains a mystery. Like all mysterious things, if there are no specific answers forthcoming, theories will be presented.

Our own theory is that New Hampshire got overwhelmed with the “heat” of the  natural and cultural amenities (as manifest in the fabulous foliage and the various art exhibits and community gatherings).  This came up against a rather chilly morning. Which gave an opening for fast moving air – similar to what happens in a thunder storm. While this might not be unique to Nelson, anyone who was around this past weekend participating in the Art Tour, the Old Library Exhibit, the Apple Fest, or just admiring nature’s tapestry, can attest that Nelson contributed mightily to this situation.

And the creative energy just keeps on keeping on. In a recent update we introduced some new music from Party of the Sun, Ethan McBrien’s band. Now here is a brand new song which we’re excited to share with you. 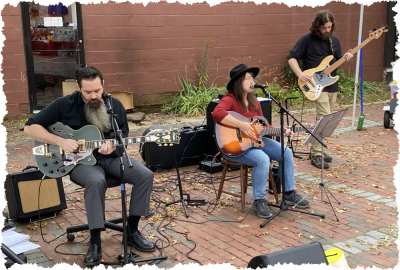 And in Keene the all-Nelson band fronted by Jess Hutchins (with Geoff Williams on guitar and Mark Grover, bass) got a nice reception from people wandering through the Artisan Market at RailRoad Square in Keene. You can learn more about Jess and her music on her website.

A New Email Address for the Library

To politely paraphrase a common expression: stuff happens. In the case of the Olivia Rodham Memorial Library, that meant the loss of their long-time email address. We’ll spare the gory details, but if you have the library in your address book, you should update the address to: 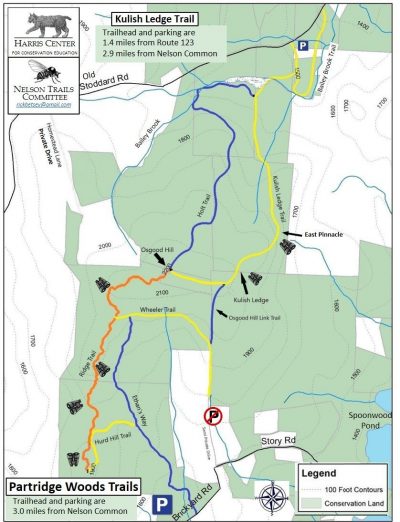 If there’s someone you’re at odds with and you want to tell them to get lost, don’t send them into Nelson’s Trails system. The trails have been recently re-blazed, and in addition, there is a new map available. It would be quite difficult to loose one’s way. What you may want to consider in such a situation is telling them to take a hike – with you. You’re sure to find some common ground. 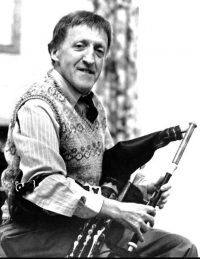 Paddy Moloney, founder and leader of the Irish Band The Chieftians, died on Monday at the age of 83. Though the band had been world-famous for decades, Paddy had heard through a friend about the Nelson Town Hall, and in 1987 he and a couple other members of the band asked if they could play here. They came, and was a fabulous concert of course, followed by a spontaneous contra dance, and then a long music session and general party at Betsy Taylor’s house across the street (currently Sarah and Andy Wilson). 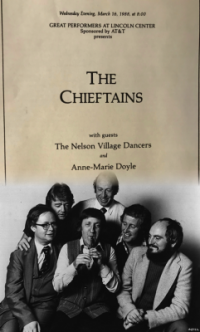 Read the full story of the multi-year Nelson connection with the Chieftains (published on the Nelson History website.

He was quite taken with the humble hall, and also  the dancing. One thing led to another and the next year he invited us to put together a group of dancers to perform with The Chieftains at Symphony Hall in Boston, and at Lincoln Center in New York. The band returned for the next two years, with shows at the Colonial Theatre in Keene, and with always warm words and memories of Nelson.

The Turning of the Year

A New Cemetery for Nelson

The Holt Trail in October

News from the Town Office 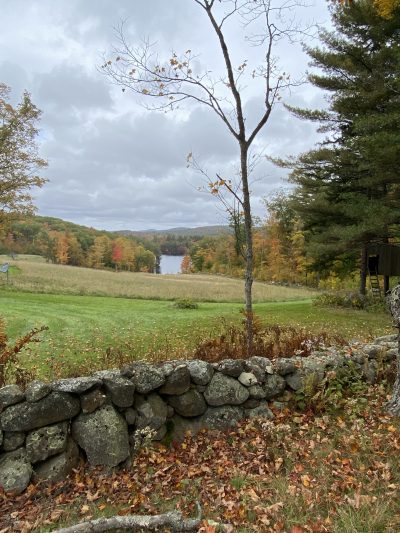 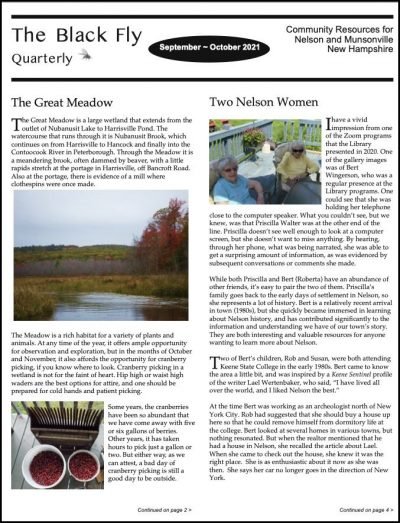 Nelson in Common is seeking a sponsor for the next (November)issue. While the sponsors of the first two issues chose to remain anonymous, we are happy to provide public acknowledgement of any person or business sponsor who wishes to be recognized.

The sponsorship price for a single issue of The Black Fly Quarterly is $350. For more information, contact editor@nullnelsonincommon.org