When people are discovering Nelson, one of the most frequently made observations is how much is going on in this small town that lacks a store, post office, other retail amenities, and which, most days you might miss if you were yawning as you drove through the Village.

Since we began the Nelson In Common website, last April, we’ve been under reduced activity: the contra dances are on hold, and there have been no concerts (which are usually monthly) in the Town Hall. Nevertheless there has been a pretty steady buzz of activity. 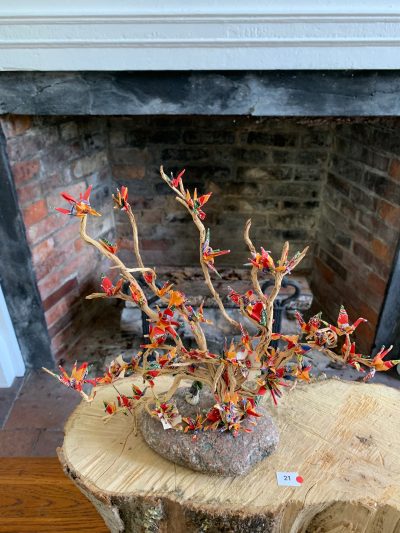 An origami creation, framed by the fireplace of the Old Library

Take this past weekend: Friday night saw the opening reception for a weekend show by Linda Singer, featuring her amazingly intricate origami, and her powerful photographs Inspired by the natural beauty of gardens and nature. (Linda also writes, and illustrates with her photos, Musings of a Nelson Gardener, a monthly column on this website.)

The reception, outside the Old Library, was so well attended that there was quite a queue of people waiting to get in (a limit of three or four people at a time, considering that the Old Library is small anyway). This was not a problem – many of us opted to hang outside and visit with friends and neighbors, and enjoy some great refreshments. We could easily return on Saturday, which we did, but even then found there was a modest line. 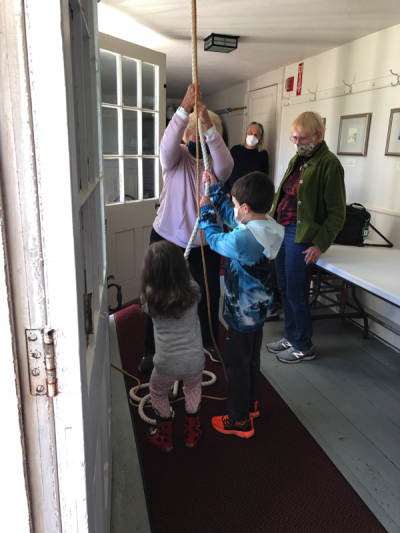 Saturday morning, at the Nelson Congregational Church, the bell was rung by a series of volunteers for 20 minutes, starting at 9:02, commemorating the twentieth anniversary of the fall of the Twin Towers on 9/11. (This activity also took place at many churches throughout the country.) Meanwhile, at another part of town, the Nelson Trails Committee was holding its monthly meeting (a dozen or so volunteers), making plans for perpetual improvements of the trails, including a forthcoming map.

Back to the Village: at 10 a.m. the Library opened for its usual hours, while downstairs the Friends of the Library held their first-in-a-long-time book collection. (Note: they have one more session where you can donate your books, Wednesday evening September 15, from 5:30 to 7:30 p.m.) These books will be sorted and put up for sale at the annual summer book sale. At this time, there are no specific sale plans, but it is certainly hoped that this is possible by next summer. 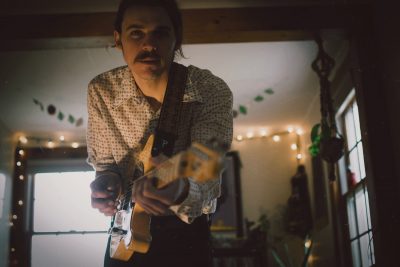 Late afternoon brought us to an album release party by Party of the Sun, a band fronted by Nelson resident Ethan McBrien. Throughout his career, McBrien has always had an interest in folk music. The new album, Fullest Hour, finds Party of the Sun merging climatic variations into musings on connectedness, nature, and fatherhood. The result is a delicate mingling of experimental Americana, psychedelic folk, and organic ambiance. This event involved a potluck, which is a Nelson way of getting a party catered with great food.

Sunday morning brought the warm welcoming of Rev. Eliot Fay as the new minister for the Nelson Congregational Church. Eliot moved here with his family from Florida; fortunately, they have lived in New Hampshire previously, so they are aware of things like winter, black flies, and zucchini.

Late morning was the final session of Linda’s art exhibit. She reports that there were many more people than she expected, which is a good thing.

There were no doubt other gatherings of families and friends, making this a happy early fall (yes, the air has that certain flavor about it) weekend. Gratitude all around to live in such a wonderful place.

Bill Dunn has stepped in to fill a Selectboard position created by the recent resignation of Gary Robinson. Bill will fill the term which expires next March.

There is a job opening for Deputy Town Clerk/Tax Collector. Candidates must be a resident of Nelson, professional, detail oriented, computer proficient, and have experience working with others. Training in Concord is required. This is a non-benefited part-time position. Applicants should send a resume, with three references.

September Reflections and Looking Ahead

Above: Linda Singer’s origami, from her recent exhibit at the Old Library.

Above: A quick trailer for Party of the Sun

Read More About PARTY OF THE SUN – Fullest Hour