Nelson’s* population in the Census of 1790 was 721. The most recent (2020) Census shows a population of 734 – a whopping increase of 13 people over a 230 year period. Of course there are some twists and turns in the story, and we’ve added some graphics to spice up the tale.

*The town was then called Packersfield, and would not become Nelson until 1814. Read about what other names were considered on the Nelson History website.

Click on the tabs below to see elements of the story.

Here’s a view of the roads in Packersfield in 1790. Early on it was a busy town despite its limitations and challenges. But it included a part of what is now Roxbury (southwest corner).  More significant in terms of population, it also included the northern part of what is now Harrisville. The Nelson boundary with Dublin went along the southern shore of Harrisville Pond (just north of the village) and along the south side of Child’s Bog and Silver Lake. 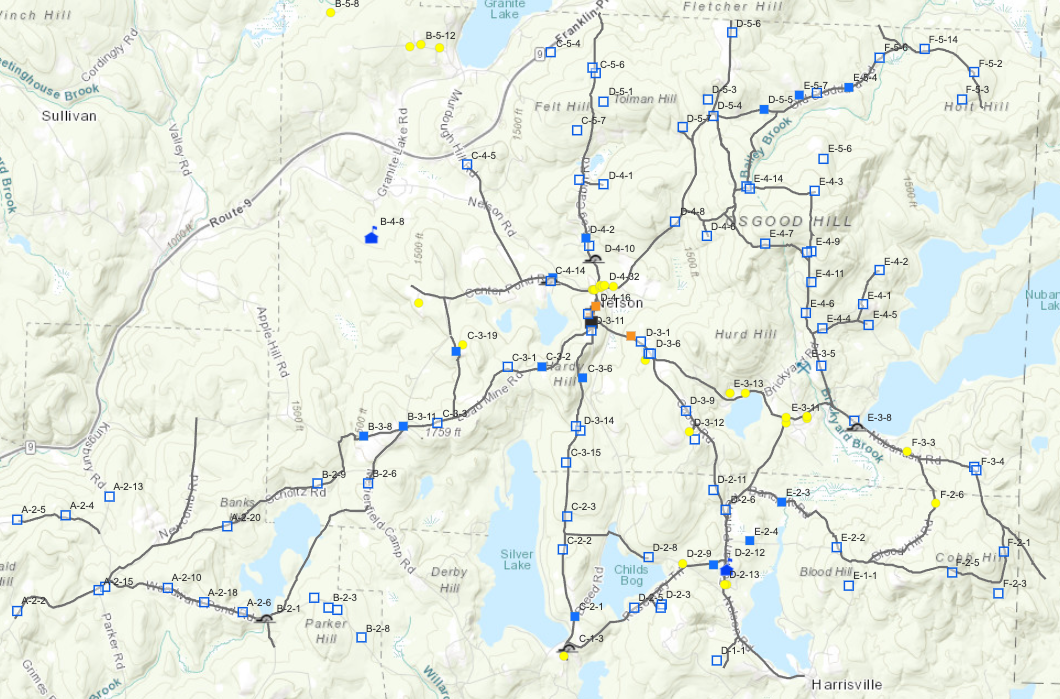 This was the year of peak population for Nelson, or Packersfield as it was still known. New England was filling up, and people hadn’t started traveling west yet (in any significant numbers). Two years later, in 1812, the southwest corner of Nelson was sacrificed to the newly incorporated Roxbury, which would have been a factor the lower number in the next (1820) Census. Packersfield was primarily agricultural, with a few saw mills and a grist mill, but not yet seeing the larger operations, such as the mill in Munsonville, which later added some diversity to the economic base. 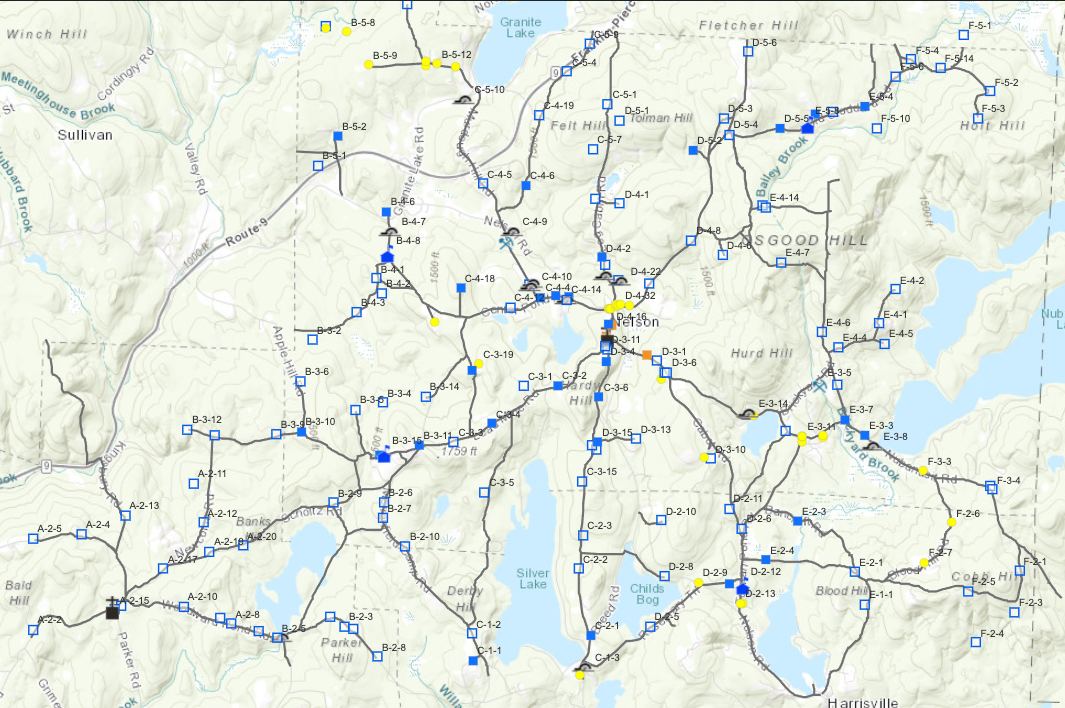 By 1870 the population of the town  began a more serious decline which continued for decades.

At this time manufacturing technologies were advancing, and towns well-suited for harnessing water power, combined with the expansion of the railroad, actually increased in population (in spite of a regional exodus to the fertile and rock-free midwest).

Nelson, having a largely agricultural economy, was not likely to grow anyway, but the most significant factor in the decline was the formation of Harrisville, which took the southern part of Nelson, and its people.  This contributed to the significant drop from 744 in the 1870 Census to 438 ten years later. Subsequent reductions continued, at a more modest rate, over the next five decades. 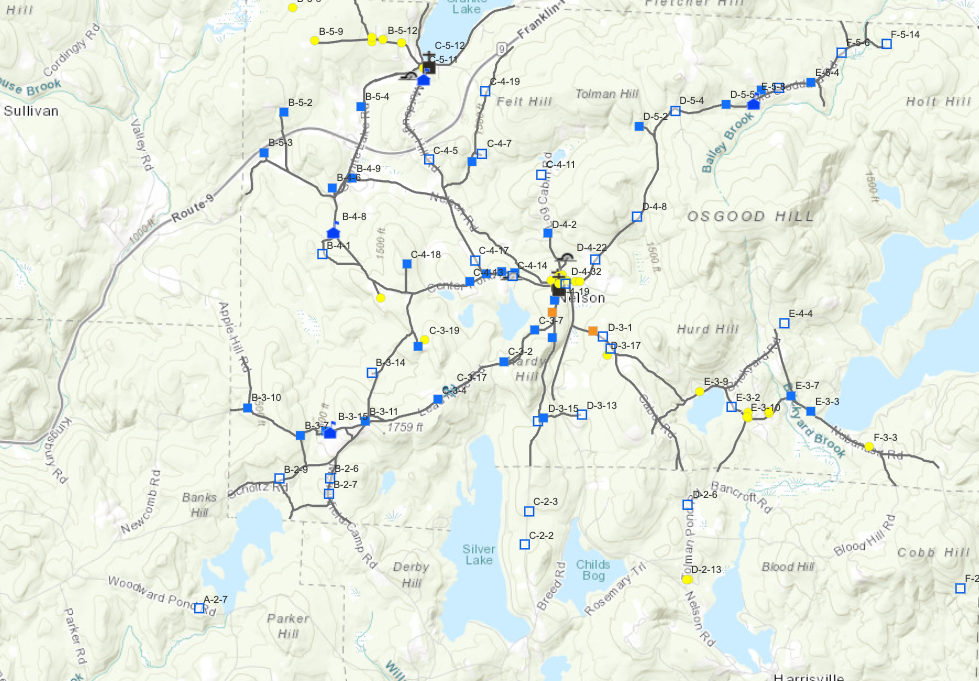 Nelson reached its lowest population in 1930. The next decade saw the influx of folks who had lost their wealth in the depression, and came up to take refuge in what had been there summer homes. But the population grew only slowly until the 1970s, when there were several years of significant growth, leveling out only in the last decade. 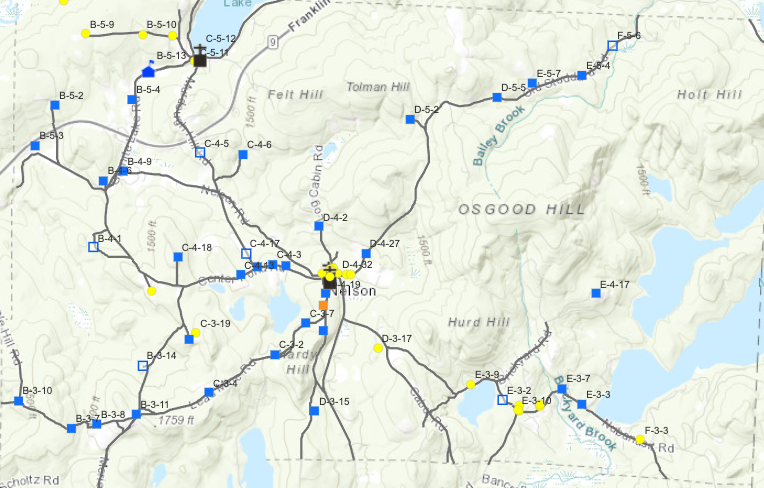 The maps shown in this article are from the Nelson History website. This map feature allows a timeline view of roads and cellar holes, with links from many of the cellar hole icons to individual articles about that location. The History website contains dozens of articles which provide a picture of life in early Nelson. It can be kind of a rabbit hole – well worth exploring. 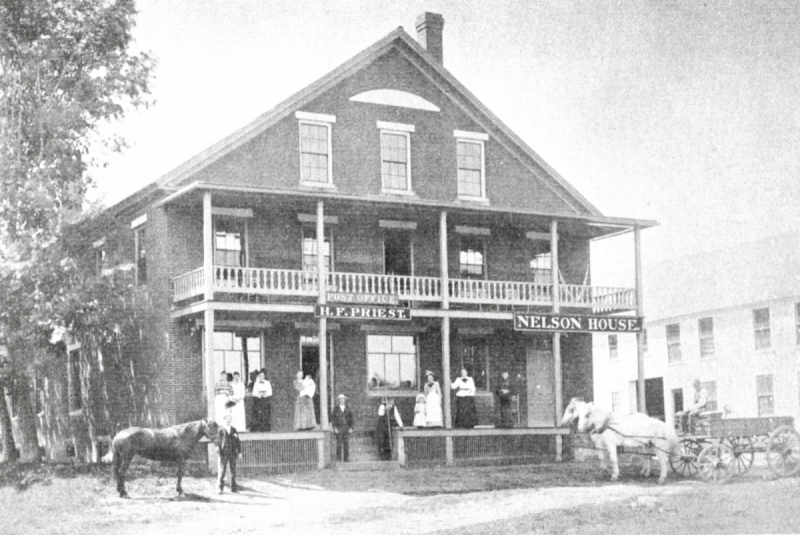