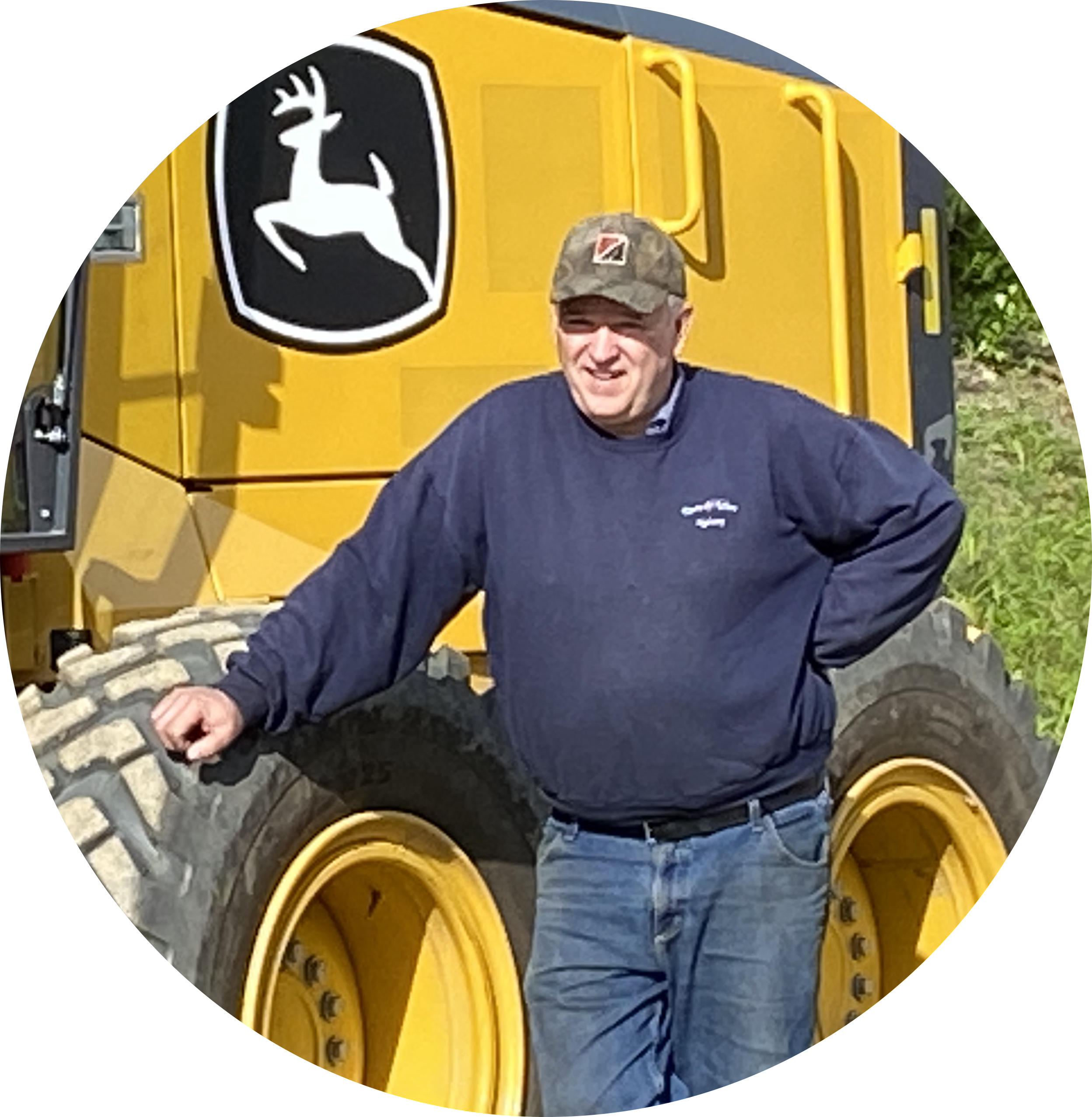 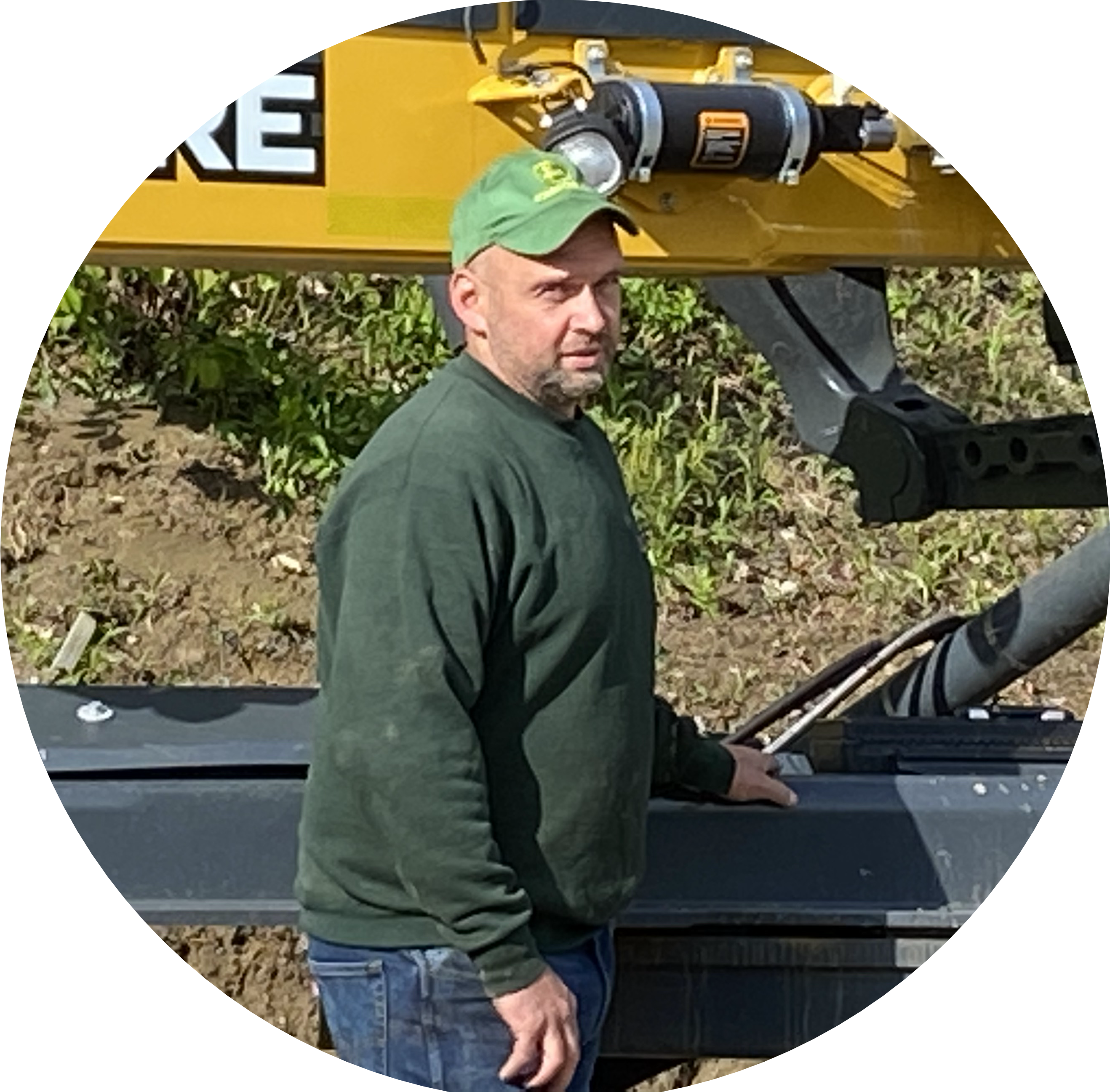 The Nelson Highway Department has, between them, been on the road for 53 years. Road Agent Mike Tarr signed on in 1988. His career was inevitable: his father Wesley was the long-time road agent in Harrisville, where his brother, Wesley, Jr. now holds the job. Wes Sr.’s father had been the road agent in Roxbury after moving to this area from Maine (where he had been a logger) in 1926. Mike grew up at home in the town truck, or on occasion, strapped to the blade of the grader so he wouldn’t fall off (a safety precaution we don’t see much of these days). By the time he came to Nelson he had already had a lifelong education in the technology of road maintenance and the equipment required for it.

Nick Barrett came from a farming orientation, starting with an influential Ag teacher in high school, which led to a job at Stonewall Farm. His ancestors settled in Munsonville in the  mid 1800s. Like Mike, Nick’s education came a lot through his father, Wilmer, and he also cites Bernie Guida, Tiger Batchelder, and Mike himself as mentors.

The similarities of these two men go beyond keeping our roads navigable. They each run haying operations: Nick hays about 70  acres in 2 locations, to feed his 25 beef cows, baling 300 round bales (which weigh between 1,000 – 1,500 lbs), and 400 square bales which he sells for horse hay.  Mike manages about 45 acres over two locations, getting hay to feed his wife’s two horses in addition to what he sells.

And they each have a sugar operation. Mike has 1,500 taps in Dublin, and Nick has 1,100 taps which (fortunately) feed into one central tank. Between them they produce between  550 and 800 gallons of maple syrup, depending on the season (which this past year was not so great).

We didn’t dare ask what they each did in their spare time. But you might notice that everything they do is impacted by weather, giving new meaning to the term “when it rains it pours.” 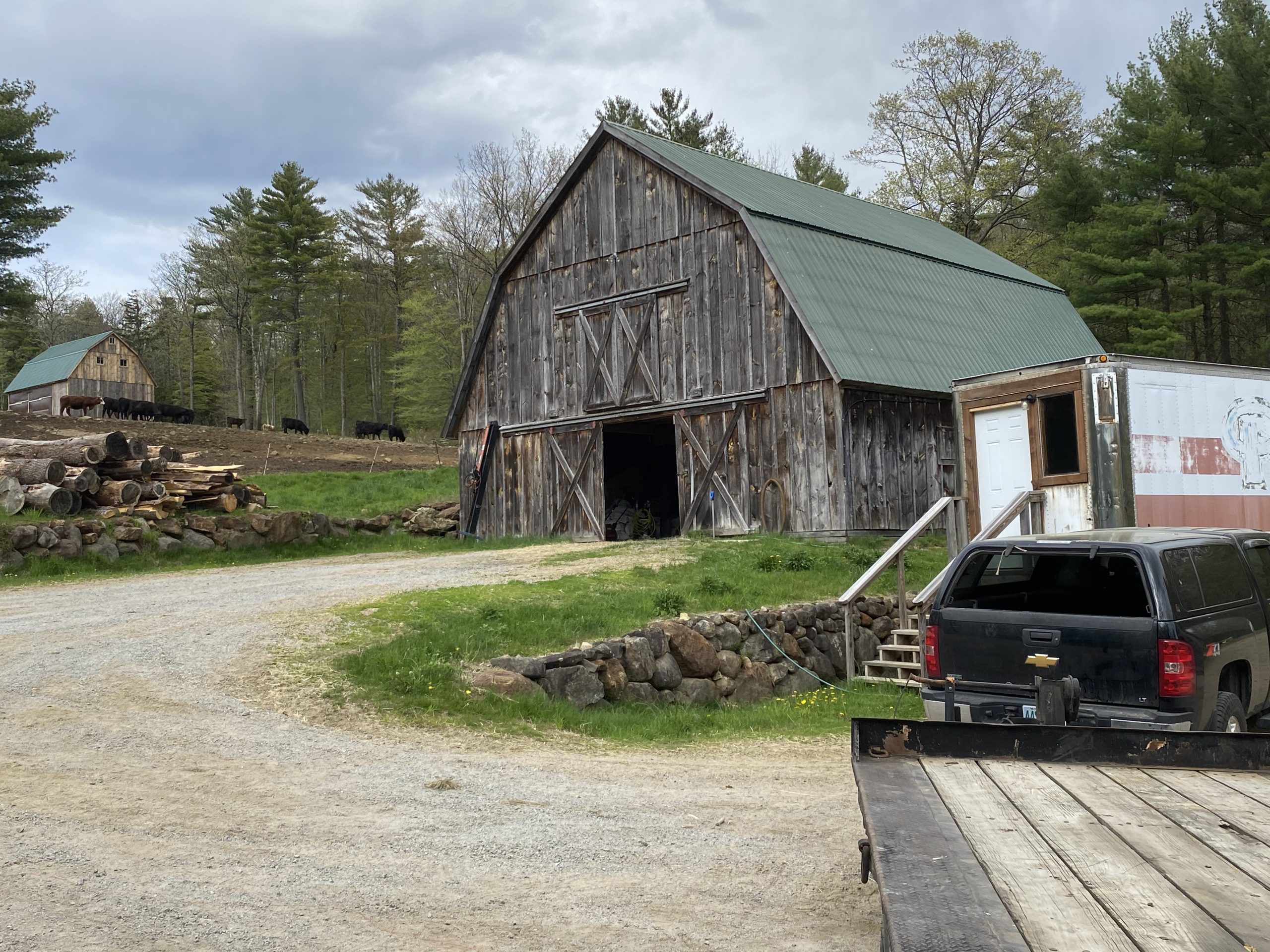 Even before you set foot on the property, looking at Nick’s farm, on McIntyre Road, you can feel the vision and determination that is required to make such a place possible. A collection of barns and other buildings seems both random and deliberate; they have evolved over the years since Nick, at age nine, started living with his father Wilmer, in what is now the expanded farmhouse. A sugar house, chicken coop, a cow barn, accommodations for an amazing array of equipment. 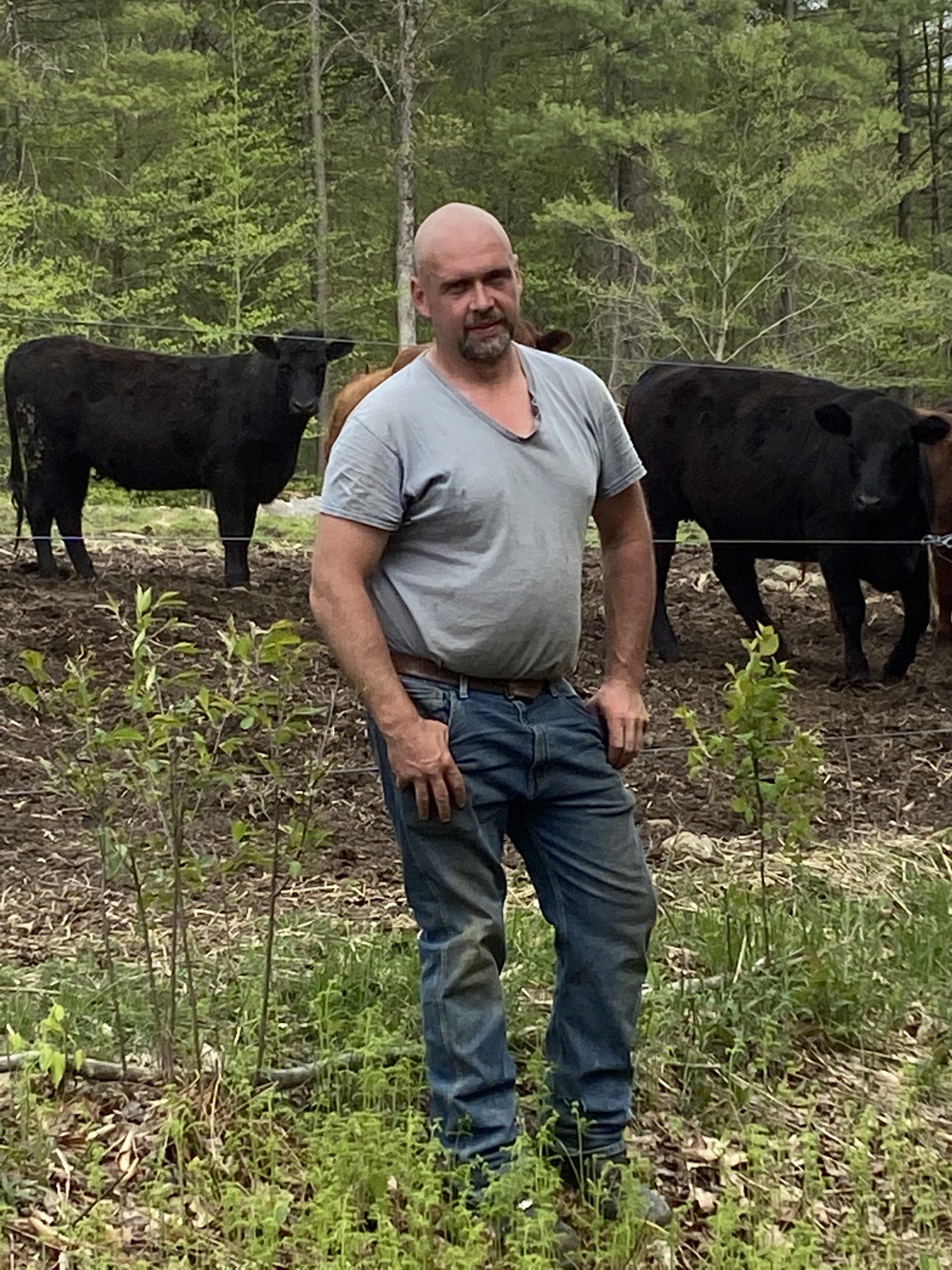 Nick probably doesn’t think of it this way, but the word “campus” comes to mind.  Each of the buildings has its own architectural integrity, displaying an appealing balance of form and function.

We ascend the hill, and while the variety of activities of the farm are evident everywhere, we come to what I sense is the core passion: a herd of 25 or so beef cows. These cows will know the farm their entire life: Nick has his own slaughtering facility right on the premises.

I remark on how much Nick must have learned to be able to build and manage his multi-faceted enterprise. He humbly suggests that it is a result of a process that still guides him: Learn every day. Keep an open mind. Learn new things.

I hadn’t even gotten out of my car, but it was clear that the first thing Mike Tarr wanted me to see was his collection of John Deere tractors. While his job requires him to be level-headed and not prone to emotional tangents, still he can’t help but convey an excitement when he is around these machines — as if each one had an individual soul that speaks to him. While he’s partial to John Deeres (he has 7), his tractor collection also includes several other venerable brands, including his oldest, a 1939 Farmall. One might think the collection should be adequate, but Mike is still looking for a John Deere Model 830 (1960s), which just might complete the collection. 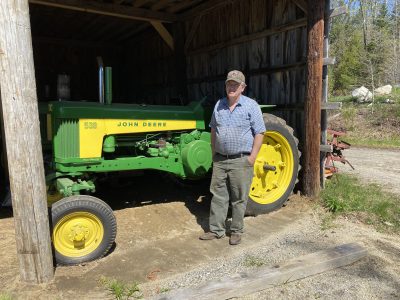 And perhaps “collection” is the wrong word; these are not museum pieces — they get used regularly for the variety of work that Mike has to do. But it’s not all work: every Memorial Day weekend Mike hosts a tractor pull, drawing machines from near and far for some light-hearted competition. 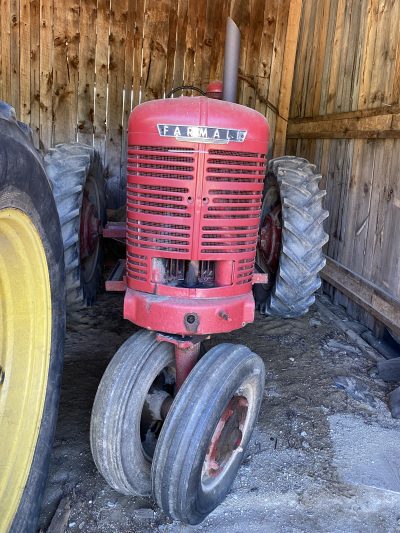 Mike bought what is now his farm on Murdough Hill Road in 1989. He replaced a mobile home on the site with a new house, and eventually added his tractor barn and a barn where his wife Buffy normally keeps her horses (they were off at “training school” when I visited). But I did meet a couple of lovely Ashley goats. When the Rt. 9 bypass was implemented, Mike, like other nearby residents, was able to take advantage of the State’s need to relocate excavated material. 25,000 yards of fill allowed him to create some level area in a town where that is a rare commodity.

There are signs of various projects underway. Mike’s truck was loaded with some bales of mulch hay that he was about to deliver, and I got the distinct impression that each day is filled with back-to-back projects, some large, some small.

Nobody really trains to be a road agent, but there are some resources available to supplement the requisite experience and, more important, temperamental disposition: “No one plans to work on Christmas Eve,” says Mike, but when it happens you have to go at it with a spirit as cheerful as Santa Claus. Snow plowing is most problematic when the roads have yet to freeze or have thawed and then get a load of snow. Inevitably dirt gets plowed as well, and there are old photos of certain hills in town where the roads appear to have been much higher than they are now. The most challenging spot in Nelson in winter is the gully on Lead Mine Road just beyond Schoolhouse Farm. There have been several precarious situations there which would have caused lesser men to throw in the towel.

But mud season is the worst, and while the quality of road maintenance, and especially better drainage systems, has gradually improved over the years, there are other factors that have made it more challenging. Changes in weather patterns, notably wind and rain, have an impact. But the most significant thing is additional traffic. Nelson’s population hasn’t swelled that much but each new house brings additional deliveries for oil or propane, and other services. Perhaps the biggest culprits are couriers. In new trends that were especially prevalent in this last year, people are receiving more and more deliveries at home. Early last early spring a UPS truck practically disappeared into Center Pond Road, and options were limited since the addition of another heavy tow truck into the mix was problematic. Courier deliveries tend to occur later in the day, by which time the roads have often softened up a bit. Once the road starts to soften and gets travelled over, there’s not much to be done until it freezes enough to grade over.

A few years ago the town acquired a gravel pit in Gilsum, which Mike cites as a great asset in terms of easily getting fill that is needed. And the new grader, purchased in 2020, has vastly improved the options for creative and effective grooming of the roads. Still, at the end of the day it can sometimes feel like a losing battle.

Another factor that contributes to the challenge of road maintenance is trees. The highway department must get landowner’s permission to remove trees, which seems reasonable enough, but there are often cases when even a modest amount of tree removal (especially dead or deteriorating trees) would facilitate being able to provide better care for the roads, and if permission can’t be obtained it’s often a matter of waiting until a calamity has occurred.

But by far the biggest challenge is the unpredictable nature of the work. To meet a snowstorm, Mike and Nick usually are out by 3 a.m. to have some chance of roads being passable when people need to get out and school buses are running. But there’s no way to know for sure when the weather is going to start, how wet snow will be, how soft the road will be, when equipment might break down, and more. It’s a juggling act, and one which seems to be done with as much efficiency as possible, and most important — with good cheer. This requires not just having no aversion to work, but a passion for the mechanics and logistics that make it all possible. Nelson can be quite proud of our Highway Department. 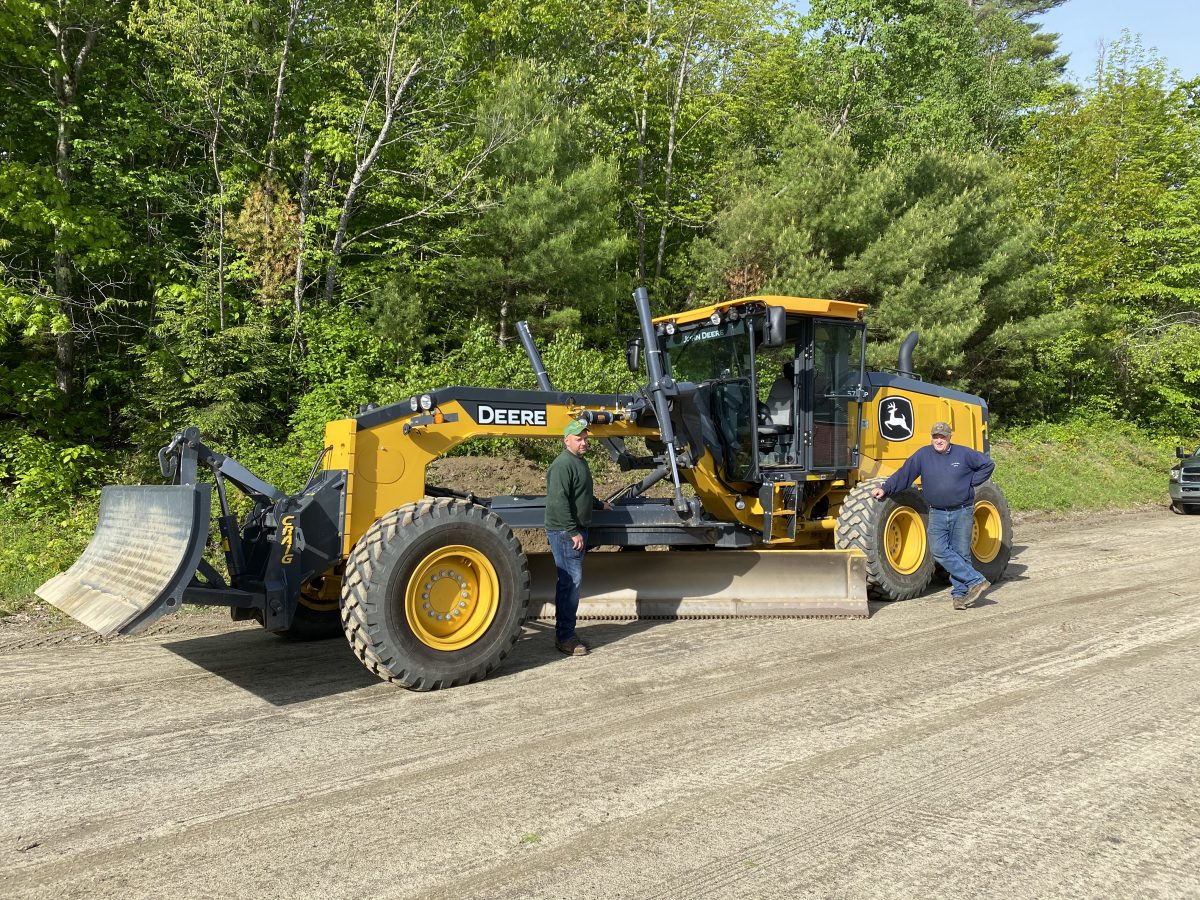