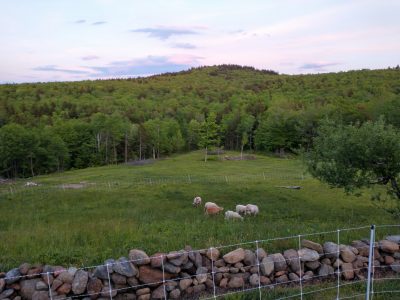 Imagine the hillsides in Nelson with few trees, and with stone walls and pasture as far as the eye can see. Continue on this daydream and now see sheep, lots of sheep, roughly 7,000 sheep. The year is about 1836. That is a lot of wool to be spun or sold to local mills (Troy Blanket Mill or Cheshire Mills in Harrisville), meat on the hoof, and manure. Our hillsides must have been rich with microbes.

In his book Reading the Forested Landscape, Tom Wessels discusses the rise and fall of sheep farming in central New England and how it affected our landscape. In 1810 William Jarvis, then American Consul to Portugal, imported 4,000 Merino sheep to his Vermont farm, kicking off a 30-year period of “sheep fever” in central New England. By 1840, New Hampshire had more than 600,000 sheep. Approximately 75% of our stonewalls were built between 1810 and 1840 to keep sheep in the newly created pastures.

Economic forces, the opening of the Erie Canal in 1825, and the subsequent westward movement toward better land clobbered the sheep business in New England by 1840, only to be revived temporarily by the need for woolen uniforms in the Civil War. Some farmers stayed the course and continued to farm in Nelson, and we still have farmers that work hard to keep their farms going, making hay, maple sugaring, and raising sheep.

Our hillsides today are covered primarily with trees, but as we walk our forests and come across stonewalls, we think about the sheep those walls kept in and the hard work of our forebears and our present-day farmers. 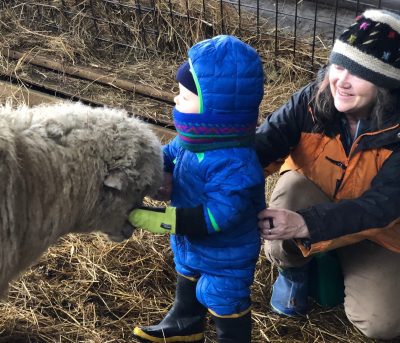 Kelly French: The French farm on Center Pond Road has had sheep for a long time. The 11 ewes that call the French barn home are Corriedale/Dorset/ Oxford, which are all considered good meat breeds. The Corriedale is a Merino-Lincoln cross, developed in Australia and New Zealand and first brought to the US in 1914. They are good for meat and wool. The Dorset is renowned for its prolific breeding ability and superior meat quality. Oxford ewes are prolific, have good lambing percentages, and the lambs are large and strong at birth. Most of the ewes will nurse twins with little effort. One of my favorite memories is watching young lambs walking on the backs of their mothers at the French farm. You may see the sheep pastured around the edges of hayfields, keeping brush down along stonewalls and in places that need to be reclaimed. Grazing sheep help keep down weeds and bring in leafy plants like clover. 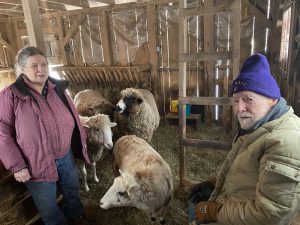 Barbara Fraser: Barbara has enjoyed her four ewes for many years. Originally she intended to learn how to spin fleece into yarn; it never happened, but she still has her “old ladies.” The ladies’ primary use now is keeping down brush. They also follow their humans around every chance they get. Barbara and Deke, her partner, have a passion for their farm animals and are looking for a farm hand. Give them a call if you can help! 603-847-9555. 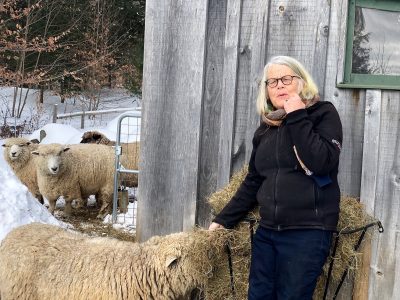 Amy Whitney and Gary Robinson: Amy loves her sheep! It all started with a 4-H program and wanting to give their son an alternative to sports. Amy and Gary have kept purebred Romneys for 25 years. Romneys produce large quantities of fleece, and Amy says she has been told their meat is particularly delicious (Amy and Gary don’t eat lamb). They have seven ewes: five white and two natural colored. The sheep spend their winter in the corral behind their home. The rest of the year they can be found grazing in various pastures near Tolman Pond. Portable electric fence powered by a solar unit keep the sheep in place. Amy and Gary move the sheep every four or five days to lessen the parasite load and keep them from pulling up grass by the roots. Note: Amy would like to mentor a young farmer interested in raising sheep. 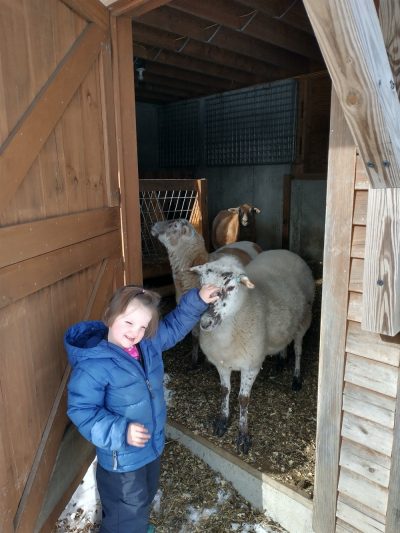 Rachel and Dan Patterson purchased their sheep through the Fall Mountain Regional High School animal science program. They knew they wanted meat sheep, and settled on a breed known as Katahdin Hair sheep, a breed that was developed in Maine by crossing haired sheep from the Caribbean with British Suffolk sheep and the Wiltshire Horn, known for its bone structure and shedding. Years later, sheep were selected without horns and the Katahdin was the result. They are known to be efficient breeders, with great lamb vigor, and are good mothers. An added benefit is they are known to have resistance to parasites. Rachel says that her sheep are docile even with her young daughter, and their meat is mild and has a “nutty flavor.” Rachel and Dan intend to grow their flock to improve the fertility of their soil. Their sheep are intended to assist them in their desire to be subsistence farmers. 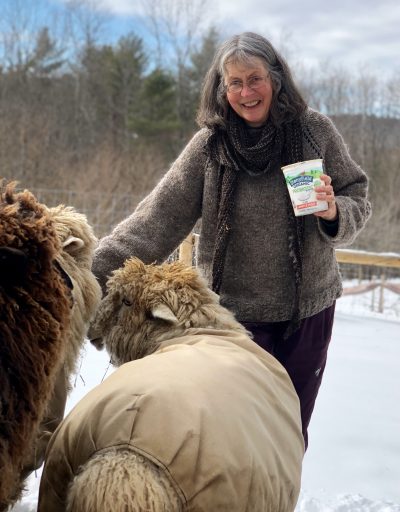 Susan Weaver and Ted Lenk started their permanent flock in 1996. Prior to that, they would purchase lambs from Bud French and raise them for meat until fall. They currently have what is known as a “spinner’s flock,” 11 purebred Romneys including six adult ewes, four yearling ewes, and one wether (a castrated ram). They plan to give the ladies a year off, so no lambing this spring. When they do have lambs they sell them for breeding stock, pets, field grazers, and meat lambs.

Over the years you may have seen their sheep in various pastures near the village and Tolman Pond. Susan rotates pastures often and provides a salt/mineral mix year round, like a multivitamin for sheep. She also shared that lambs are very susceptible to parasites, and if they graze on “dirty” pasture, they can get sick and die quickly.

Through Elemental Designs, Susan’s business, she markets most of her fleece to hand spinners as raw fleece, washed fleece, dyed fleece, and roving. Green Mountain Spinnery in Putney, Vermont, spins the wool into yarn. She sells dyed and undyed yarn to knitters primarily at various sheep and wool festivals. You can find Susan’s yarn on the Nelson in Common Bulletin Board.

Susan wants people to know that the sheep are wearing jackets, not because they are wimps, but so their wool stays clean.

The Lowdown on Sheep Manure

Sheep manure is considered “cold” manure because of its low nitrogen content, making it an excellent addition to any garden. Sheep manure is a natural slow-release fertilizer, high in phosphorus and potassium. These nutrients help plants to establish strong roots, defend against pests, and grow into vibrant and productive plants. Sheep manure can also be used as organic mulch. Because of its low odor, sheep manure can easily be used to top dress garden beds. A garden bed that has a high level of organic matter drains well and has a high number of earthworms and soil microbial activity.

We’ve created a sheep gallery for your further enjoyment. 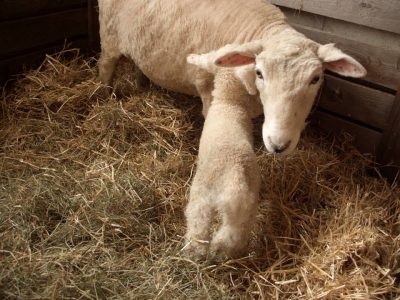 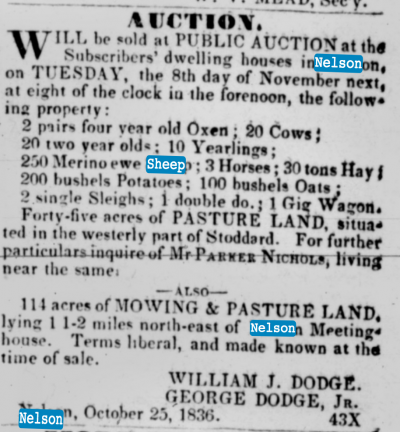 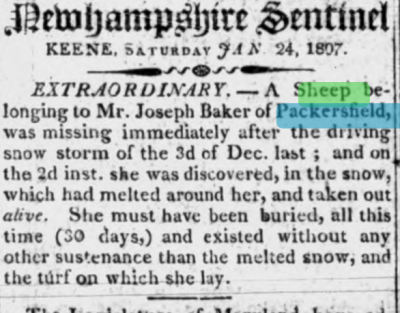 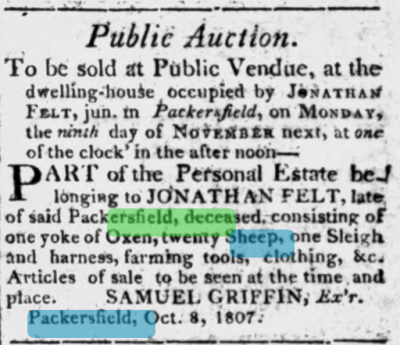