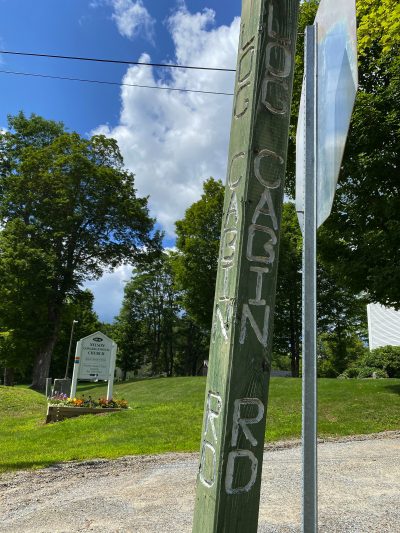 I have lived in Nelson for 40 or so years, and during that time had often seen, and occasionally traveled on, Log Cabin Road. Only recently did the question pop into my mind, why is it called that? Many of our roads bear the names of families who dominated a particular part of town: Hardy Hill Road, Tolman Pond Road, Murdough Hill Road. Others refer to enterprises, such as Lead Mine Road or Brickyard Road. Many refer to geographical features: Long Pond Road, Center Pond Road, Breed Pond Road.

Thankfully, we seem to have bypassed (as it were) such names as Main Street (God forbid!), Pine Street (which one would it be!), or anything with the suffix Avenue.

Log Cabin Road would appear to be unique in its nomenclature, and for an answer, I turned to Rick Church, who in addition to being our town’s authority on roads (and cellar holes), actually lives on Log Cabin Road.

Rick referred us to an article on the Nelson History website, which notes that in 1903, Frank Foster built a log cabin, on the site of a house which had been built in 1779. This isn’t exactly Davey Crockett country here: a log cabin would have been somewhat unusual. It was built as a summer home, and probably inspired by similar structures (though they were more grand) in the Adirondacks. In any case, it was unique enough to cause the road to be referred to as such. Of course, we don’t know (yet) what the road was called in the hundred and twenty years between the first house there, and when the cabin was constructed. The cabin, now gone, would have been about .8 of a mile past the current terminus of Log Cabin Road (at least as applied to vehicular access).

According to Rick, it is very hard to get a handle on road names – it was not unusual for them to change, especially as families moved or functions changed. Breed Pond, for instance, is now Silver Lake; Long Pond is Nubanusit. My own road, Old Stoddard Road, was just as frequently referred to as City Hill Road when I first came to town. This is in reference to City Hill, which is another name for Osgood Hill (see sidebar).

Nelson’s original “thoroughfare” came in from what later became Roxbury, and right about where there’s the big curve in the the dip, came into Lead Mine Road. From that location Lead Mine Road still exists, and makes its way into the Village. The road then continued out Old Stoddard Road, but just across from Homestead Lane, it turned north and went over to Stoddard. The general area of that extension is now a private driveway. 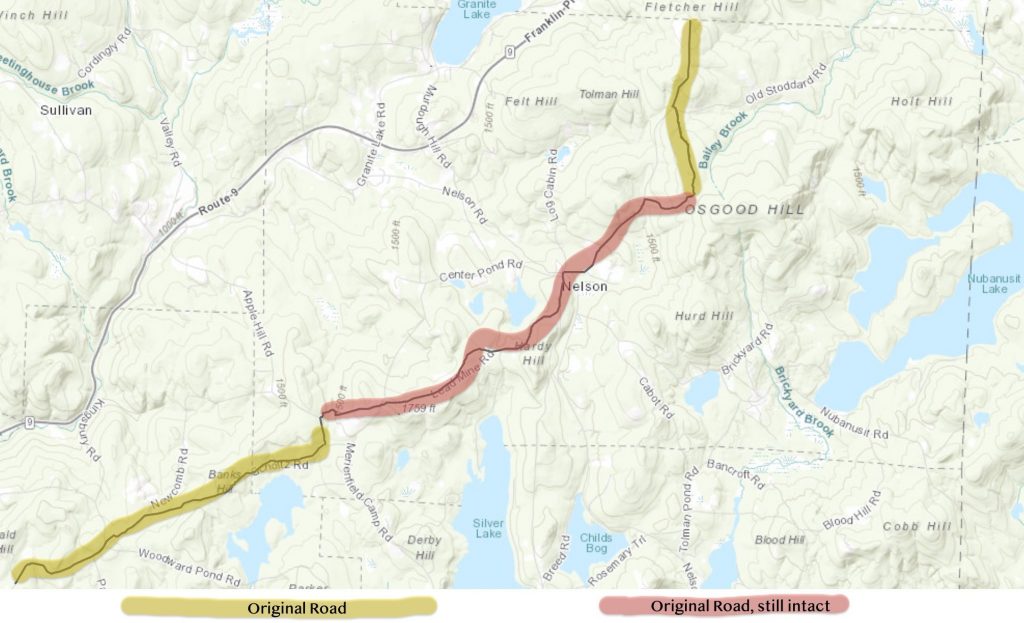 If you are not familiar with the map on the Nelson History website (from which the above image was made), we encourage you to explore. There is an animated timeline so you can see how the roads (and cellar holes) grew, and then eventually started to decline. The map also contains markings of cellar holes, with many of them being linked to articles about their origins.

It’s amazing to think of the effort involved. Since cash was scarce, some people found it expedient to pay off their taxes in the from of labor to help in the road building. Taxpayers today would have to compete with the town’s magnificent excavator, so our town government is unlikely to suggest this solution for modern times.

Osgood Hill came to be known as City Hill in the early 1800’s, when there was a short lived “development” of sorts – as many as fifty homesteads. Today we are hard pressed to understand why this less than hospitable terrain would have enticed settlers, and indeed, the charm wore off – in just a few years most sites had been abandoned. 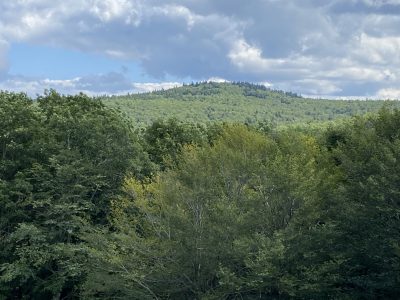 Several other lesser peaks in southern New Hampshire are referred to as mountains, and it’s perhaps a typical Nelson understatement to call Osgood a hill. In  Places like Gap Mountain and  Crotched Mountains are lower elevation,  though they feature more prominently in the landscape. 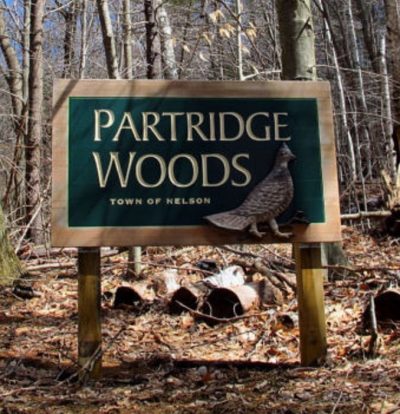