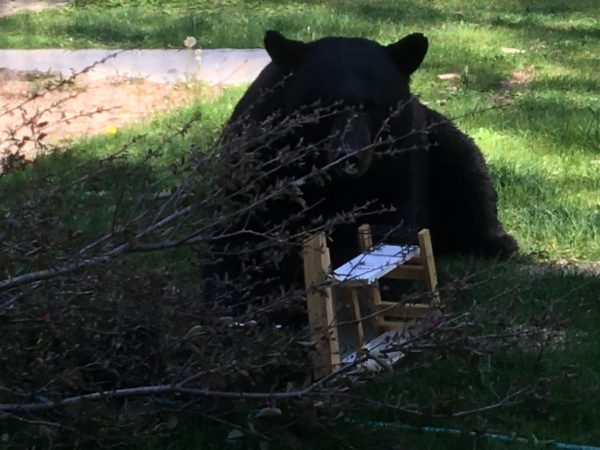 A rather substantial bear recently paid not one, but two visits, to the home of Mike and Kathy Blaudschun on Old Stoddard Rd.

On his (size suggests it’s a male) first visit he made a mess of the mud room to raid the bird food supply. Not being educated about how to use a door handle, he simply tore his way in.

On a return visit a few days later he had somewhat better manners: he broke in, lifted the barrel of bird food, and carried it outside before spilling it on the ground to eat.

This second visit prompted a call to New Hampshire Fish and Game, who said they are getting an increasing number of calls about bears. They have some useful information on their website.

Their basic advice is to not just remove bird feeders, but also make sure the supply of bird food (especially sunflower seeds, which have enticing oil) is really put away. In this case it was seemingly safe in a mud room behind closed doors, but apparently that is not enough. Fish and Game recommends an April to November hiatus, though experience has been that spring is the time bears are most likely to be this assertive. (Two years ago a bear raided two chicken coops, also on Old Stoddard Rd., probably primarily after the chicken food, but they dined on the chickens as well).

While bears can inspire some trepidation, they are rarely known to harm people, and even the family dog is likely to scare them off. The most vicious bear will be a mother with cubs.

It has been a fabulous bird season, so it is very tempting to keep feeding them, but everyone should understand the risk.