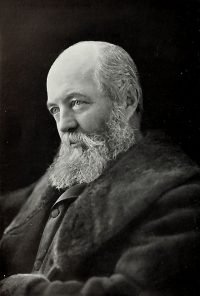 When I was in college, and later in graduate school at MIT, in the City and Regional Planning Program, I had many opportunities to come across references to Olmsted, often called the founder of landscape design in this country. Upon occasion, I have walked through a few of his creations: Central Park in Manhattan, along the Fenway (part of the Emerald Necklace) so valued by Bostonians. And on the grounds of private residences, most recently at the wedding of Butch Johnson, a longtime Nelson summer resident (now no longer with us, unfortunately), in Yarmouth, Maine. The house and grounds where the wedding was held were quintessential Maine summer cottage c. 1880. Delightful. On the wall of the entryway was the original plan for the grounds, as laid out by Olmsted, so Pamela and I could walk around and see what had been kept of the original plan, and what had been changed over the years. Much was the same. Much had been changed.

Just down the road from where I now sit in Nelson is an “Olmsted” landscape design, sort of, which is unchanged over the years. This is the story. 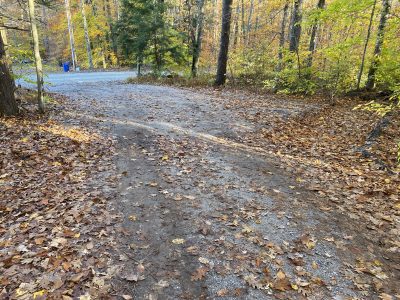 William Hall, a nephew of Olmsted, built a summer place called Greengate, beyond the end of what is now called Brickyard Road, where I live. Wilmer Tolman built the driveway to it, and cut some of the lumber for its construction at his sawmill. He looked after it in the winter for Hall, and so was well known by the family. One early fall afternoon, as Wilmer was working on the driveway to summer cottages he had built for rental at the upper end of his mowing, Olmsted went by (while in town to visit his nephew) and stopped to talk. 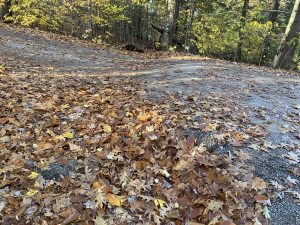 I think of their conversation as along the lines of the following:
“Wilmer, what are you doing?” Olmsted asked.
“Ah, well, I’m trying to divert rainwater from washing out the camp road. It’s a little steep here, and if the water is allowed to run down the wheel tracks, the gravel in the road will wash out.”
“Yes, I see, and you can’t put a culvert in because of the big rock and maybe ledge,” Olmsted replied.
“Quite so,” Wilmer said, neglecting to mention that he thought such expense uncalled for.
“And what do you call this structure you are building?”
“A water bar.”
“Indeed. A water bar. And that’s just what it does – it bars the passage of water. Wonderful. May I give you a hand?” Olmsted took off his jacket, grabbed a shovel, and together he and Wilmer created a water bar on the camp road, which remains here to this day. (This action of Olmsted’s is firmly located in family lore, though the words may have been different.)
Others have worked on that water bar in the century or so since that time. Certainly Gordon Tolman, Rodger Tolman, Harvey Tolman, and myself, and more than likely many others now forgotten. But it’s still known in my family as “the Fredrick Law Olmsted Memorial Water Bar.” And unlike many of his creations, it is essentially unchanged from the day of its construction. I like to think both he and Wilmer would approve.

To the extent this oral tradition has any relationship with reality, what does it tell us about Olmsted? He was of an inquiring mind. He was not averse to talking with real people nor working with his hands. Even in old age he had a lot of energy. Perhaps also he was bored with the company of his nephew’s family?

Editor’s note: Ethan Tolman was a significant figure in the (relatively) recent history of Nelson. He served on many town boards and committees, and served for many years as the Town moderator. He was a prolific writer and astute historian. Other articles he has written can be found on the Nelson History website.

So – where is this water bar? If you think you know, put your answer in the comments below.