A third exploration of the northwestern corner of Nelson, visits to the Cheshire County Registry of Deeds, and some poking around on genealogical websites adds to knowledge of the cluster of three foundations in this remote area. 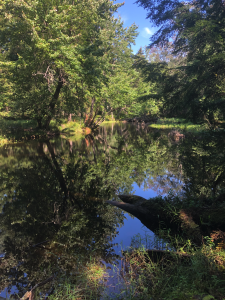 Otter Brook, in the northwest corner of Nelson.

Read the first article, in which the mysteries begin to develop. 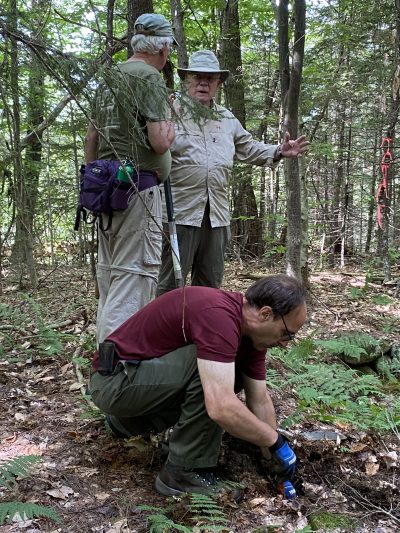 Read the second article, in which some answers, and more questions, emerge. 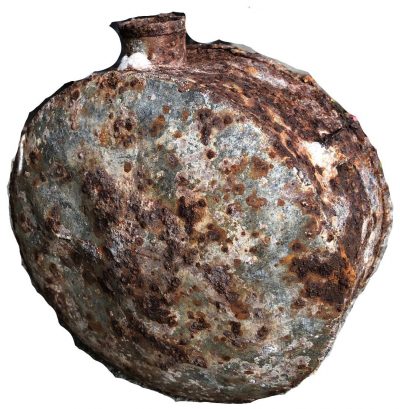 Despite two previous trips to the site, it remained somewhat of a mystery, like a puzzle without all its pieces. It seems clear that the three buildings, though a hundred yards apart from each other, were part of a steam-driven sawmill erected in late 1854. Deeds of the area tell us that Pembroke Fisher of Keene had bought the former farm of Timothy Russell Buxton, containing 240 acres. Henry Wheeler began construction of the mill buildings even before he closed on the 9-acre parcel from Fisher. At least two more men were involved as developers and operators of the mill. These operators bought three small contiguous lots and timber rights to over 200 acres from Fisher. Sawmill operations seem to have ceased in 1860, but the site seems to have been used for some other purpose until 1866.

Al Guida drove Bill Dunn and me out to the site. Bill, being the youth in the group, graciously rode in the back of Al’s ATV as we bumped over a very rutted road that was perhaps in use for 200 years. Our objectives were to search for additional artifacts, take some further measurements of the ”barn” foundation, find “a large stone with smaller stones on top” that is a corner of the “steam mill lot,” and figure out how they got water to the mill. 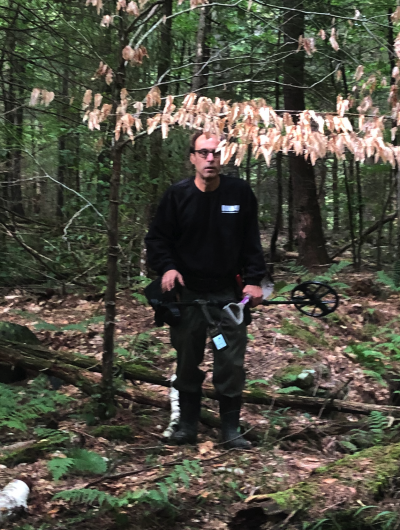 Bill Dunn, about to detect metal

Prospecting with Bill Dunn and his metal detector is fun and revealing. Bill sweeps the ground in “likely” places and is alerted to the presence of metal under the ground by a loud squeal and a number on the screen that displays the strength and depth of the find. Then the digging begins. A hand-held device, aptly named “the carrot,” is used to probe the hole to find the precise location of the object. On this trip, Bill found some beautiful cast-iron stove parts that belonged to a stove used for both heating and cooking. On a previous expedition he had unearthed a child’s toy bowl made of lead. The stove parts seem to confirm our mid-nineteenth century date and the toy suggests a family lived there once.

The measurements of the “barn” completed the work Janet Yardley and I did earlier and allowed me to finish a sketch (see below) of the stone work there. I use the word “barn” to describe it because it looks like a classic barn foundation dug into a hill on one side, open on the downhill side, and having interior low walls to help support the floor above. Unlike actual barn foundations, there isn’t enough headroom between the barn floor and the ground for people or animals. It is barnlike in size and shape, measuring 38’ x 52’. 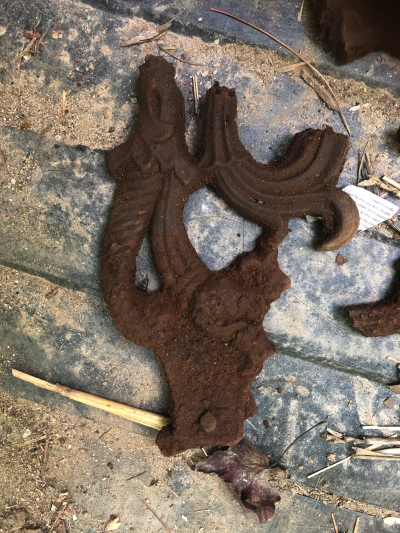 It also has some special features. Inside the walls are two stone-lined 10’ x 10’ pits. The innermost pit is connected to its neighbor, slightly downhill, by a shallow ditch, and that pit has a shallow ditch that exits through the lower wall of the structure. Further downhill, and external to the structure, is a third pit with a ditch leading down the hill to an intermittent brook. There’s a pile of broken bricks and mortar on the downhill side of the building. There’s also a 3’ x 6’ x 2’ block of stone. It weighs 4,600 pounds. What was its purpose? Bill Dunn found cast iron pieces here that might be stove parts. Barns do not usually have chimneys or heat. I have given a copy of the sketch to Alan Rumrill of the Historical Society of Cheshire County for his opinion. It is probably the site of the steam-powered sawmill.

Deeds document two interesting rights included for the mill operators. From a deed in 1855: “Said Wheeler [Henry P.] and others to have the privilege of laying an aqueduct not to exceed 30 rods on said Fisher’s land for the purpose of bringing water to said mill.” This was likely a wooden structure to bring water from a small stream about 100 yards east of the mill. To reach the mill, the aqueduct would have been 12-15 feet above the ground at its tallest. The mill operators also had the right of “coaling,” a process of making charcoal. Charcoal burns hotter than wood and requires a smaller firebox to produce its heat. It isn’t clear why the mill was sited here, when there was easier access to water at Otter Brook a little distance to the west. It is also clear from the deed research that all three buildings and their equipment were removed.

It is interesting that early Nelson sawmills were waterwheel-powered with substantial rock foundations. Then as now, the logs came to the mill to be sawn. In the case of Henry Wheeler’s mill, the mill was brought to the wood and removed once the wood supply was exhausted.

We found the “large rock” but the ”stones on top” are gone. It sits right on the old line between Nelson and Stoddard on the north line of Pembroke Fisher and the south line of Mark Tarbox.

Our principal characters are Pembroke Fisher, landowner, Henry Wheeler, builder of the mill, Royal Earle, mill owner/operator, and Elliot Davis, who occupied the place for about five years after the mill closed. Investigations in Ancestry.com reveal some things about these four men. None of the people named in these deeds were Nelson residents when our story begins. Two were “locals.” Pembroke Fisher bought the Buxton farm while living in Keene, but he’d been born in Stoddard. Elliot Davis grew up next door in Gilsum. Henry Wheeler came from Worcester, and Royal Earle, who seems to have been the principal operator, from Rockingham, Vermont. The latter two men had grown up in Vermont together and Henry Wheeler was married to Royal Earle’s sister. Wheeler and Earle moved on once sawmill operations ceased. Davis seems to have lived on the site until 1866 and Pembroke Fisher lived in his farmhouse until about 1870. 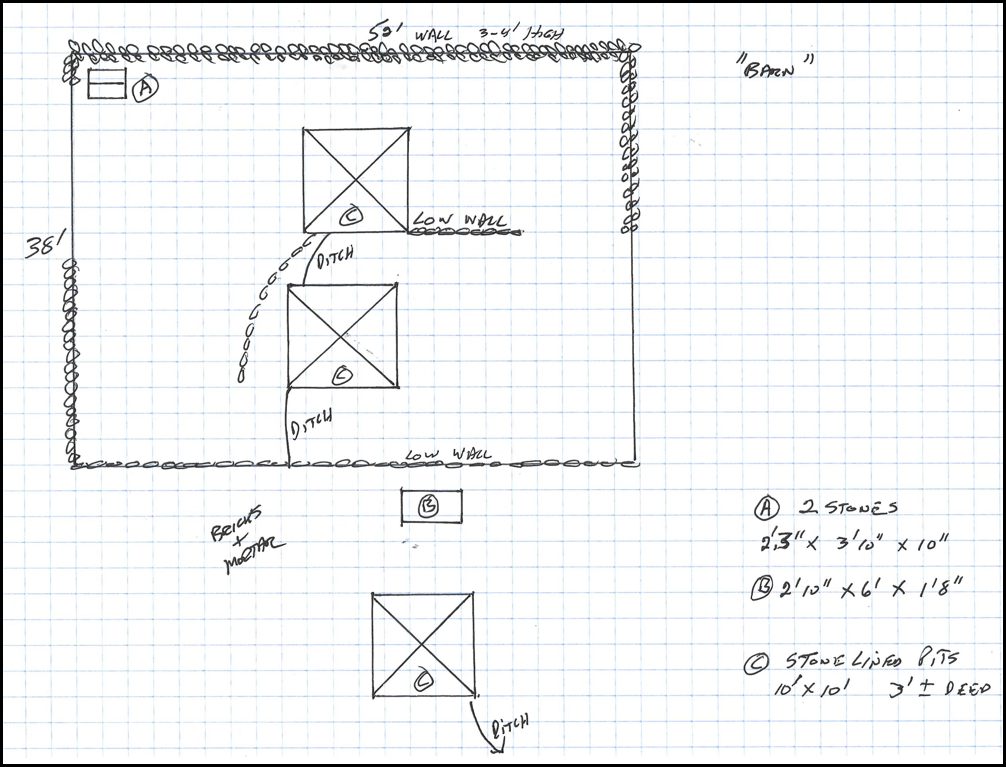 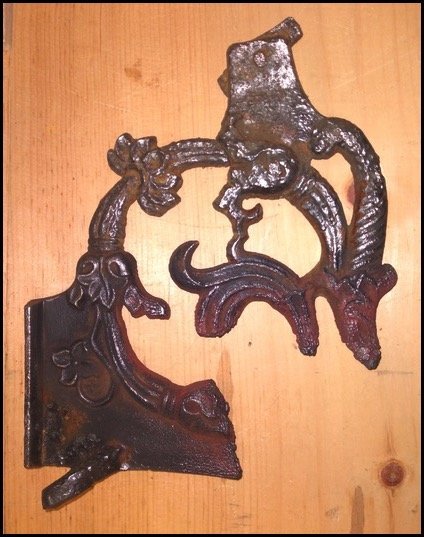 Rick Church has written extensively about roads, cellar holes, and the early settlement of the town.

See his articles (and many others) at the Nelson History website.