The Mystery of Aaron Beal’s House

The Mystery of Aaron Beal’s House 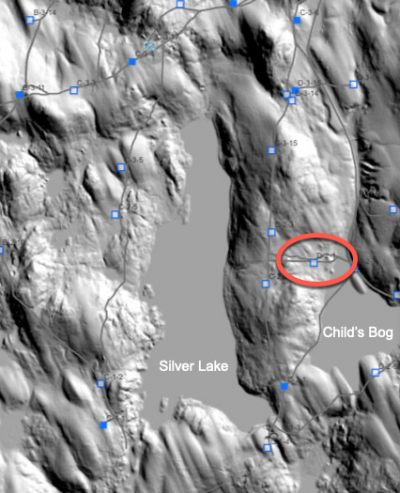 In the process of tracing the path of an old road north of Child’s Bog on a LiDAR map, I noticed a feature near the road that seemed to be a cellar hole. I identified the current property owner and invited myself over for a look. Sure enough, there was a small but distinct cellar hole with a well right on the edge of it. There was no pile of bricks or small stones where a chimney might have been.  Its appearance suggested it was quite old and was not inhabited for very long. Now the questions were: who built it and when.  The early deeds to that part of Nelson (then Monadnock Number Six) showed the owner of the two-hundred-acre farm that included this site to be Aaron Beal (also spelled Beel). Beal bought two lots of the original right of Joseph Parke from Moses Adams in 1769. By the settlement survey of 1773, he had a “pole house” built and 27 acres cleared. The trouble with this site as being Aaron Beal’s house was that I “knew” that Beal’s house was located on the old road to Dublin laid out in late 1773 whose description reads in part: “thence running between said Aaron Beal’s house and barn….” The 200-acre farm was not subdivided until recently. The small cellar hole is not located on the old road to Dublin  and here’s no barn foundation across the old road that had led to my discovery. Who built the home on Aaron Beal’s property and when?

I asked the current owner for permission to come back with my history colleague, Bill Dunn, and his metal detector. He agreed. I also told the owner that he owned anything we might find. Bill brought along two detectors and we swept the small site. I got lucky first, discovering a round object a few inches below the leaves. It was a pewter button that the homeowner must have lost off his jacket. Bill found another button, two hand forged nails and several 30 caliber shell casings. (Did that 20th century hunter get her deer?) The paucity of nails and absence of a chimney is unusual for a house site. 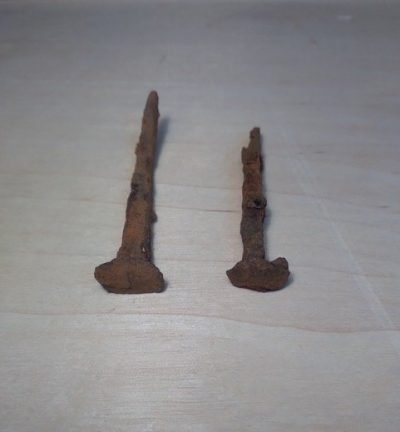 Bill’s value in these expeditions goes way beyond his ability to find things. He has developed a deep knowledge of artifacts. He immediately identified the nails as “rosehead” nails, hand forged probably no later than 1790. The absence of bricks suggests a chimney made of sticks and mud. Relatively few nails seem to confirm the building as a log cabin. We showed our modest finds to the owner and Bill took them home to further identify them. He carefully cleaned the buttons and determined his find to be a “dandy button” with an interesting pattern on it. This was a fancy, dress button that was probably gilded.  He dated the buttons to the same time period: late eighteenth century. With no artifacts, other than the rifle shell casings, younger than 1790, it seemed pretty clear that we were looking at the log cabin Aaron Beal built after he acquired his land in 1769.  Aaron Beal was a blacksmith and we may be looking at nails he forged himself! The family’s tenure in the small cabin would have been short.   They built a proper board house on the road to Dublin a few years later when sawn boards became available locally.  The new house was much more substantial and was the center of a large farm until well into the nineteenth century.