Picnics have factored into Nelson’s history in significant ways. While Parke Struther’s account (excerpted below) does not reference it, Nelson was the first town in the country to hold an Old Home Day, and it all started with the Picnic of 1878.

During the last week in August, in about 1875, a number of Nelson families met at the Noah W. Hardy farm for a Basket Picnic. There was a large maple grove south of the residence, easily accessible for horse-drawn vehicles. The gathering proved successful and became an annual affair. In 1879 the following notice appeared in the New Hampshire Sentinel:

“Basket Picnic in Nelson
Friends, residents, and former residents will 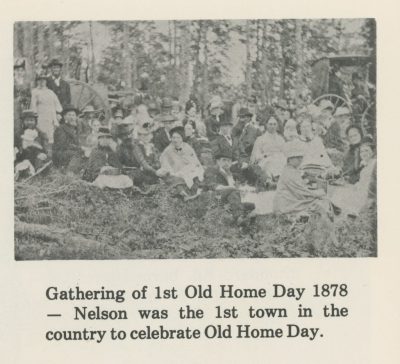 hold the Annual Basket Picnic the last Wednesday in August, if the day be pleasant, and if not, the next fair day.” [Struther’s account then goes into great detail about the event and the location].

The Basket Picnic of 1879 has come to be considered the first Nelson Picnic. Shortly after that Basket Picnic, which taxed the Hardy grove beyond its capacity, two meetings were held in the Concert Hall [upper floor of the Brick Schoolhouse] to consider plans for future picnics. As a result, the Nelson Picnic Association was organized. A new picnic site was selected south of the Village, on [Center Pond Road].

Quoting from the New Hampshire Sentinel: “Our annual town picnic was observed at Melville’s Grove, August 24th, 1886. The day was fair, and we think all will testify that it was a perfect success; there were many people from all adjoining towns estimated from 1,000 to 1,200.”

“In 1948 the Nelson Picnic was held on the Village Common for the first time. Changing ways of life made this desirable — available electricity, adequate parking facilities, and a more open pace for activities. The spirit of consanquinity and gastronomic satisfaction plays an important role, together with the competitive type of entertainment.”

From Parke Struther’s History of Nelson, New Hampshire 1767-1967, available at the Library.

There is also a wonderful account of the history and memories of Old Home Day written by Bob Struthers in 1993. This article appears on the Nelson History website. 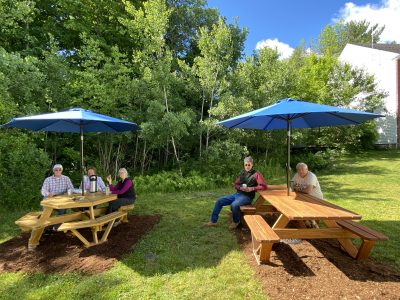