The Picnic, the Runaway and the Hurricane

The Picnic, the Runaway and the Hurricane 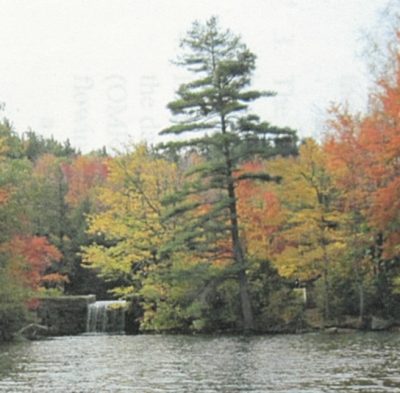 Scene of the adventure

Quite a while ago, I was eight. Four kids and one grownup went on a canoe daytrip and picnic and were rudely interrupted by an unexpected hurricane.

My best friend Jim, also eight, his sister Mary, ten, and brother Pip, twelve, their mother Hallie, and I were the cast and crew of this epic adventure.

In those days the only person I know that listened to the weather with Don Kent on WBZ radio was my grandfather, but he was not at the camp at the time. Most everyone else opened the front door and looked up. It’s still the only reliable way to forecast the weather in New Hampshire.

We kids weren’t much into weather, so Hallie must have looked up and seen blue skies. The adventure was on! We all climbed in the back of the family pickup. We trundled down a dead-end rutted road, parked, unloaded our provisions, and set off down an old logging road.  Our destination: the old granite dam on Spoonwood Pond.  This special place was the first in a series of lakes, rivers, and wetlands powering the old woolen mills in Harrisville. It was and still is fine habitat for deer, bobcat, fisher, raccoon, mink, otter, and, more recently, moose and bear. Turkeys and coyotes have also returned. You could, in theory, paddle from Spoonwood to the Atlantic. Haven’t researched the portages though.

So, back to the adventure.

At Spoonwood we packed our picnic and ourselves into two aluminum canoes. After squabbling over paddling pecking order we started our mile paddle on this beautiful wilderness pond. Each canoe was trolling for that giant native brook trout. (Savvy Hallie did not count on our fishing success, so also had packed a lunch.)

Our gang arrived at the granite block dam, avoiding the whirlpool where water raced under.  It boiled up like white water on the other side. A variety of fish hung out in the bubbling water enjoying the sport.

Once landed, we kids got chores. Clean up the fire circle, get wood, and get kindling. (Sometimes it seemed like our first names were all Getwood.) This is the point where Pip, more prone to hissy fits than most, decided to run away. No one worried – we assumed he’d run away to the island pasture as this was the only place to go to on the island.

But then, thunder sounded far away to the south.

Orders were given! We hustled, pulling in and flipping canoes, tying them down, stowing paddles and gear underneath. We grabbed our picnic supplies and took them to the only place to hide on the little isthmus. Under the sluiceway on the downstream side of the dam was a 6x6x3-foot cutout used for opening or closing the dam. We four had shelter and food, but Pip was still among the missing. I remember eating all the s’mores, then the potato chips, and finally trying to read the hotdog package to see if they were precooked or whether we would die if we ate them.

As we huddled together in our granite hideaway, what we thought was merely a passing thunderstorm grew more and more ferocious. Quite soon, the whole thing stopped being fun as trees and branches cracked and white caps pounded the dam.

More time passed. We were wet, cold, tired, hungry, and still missing our runaway. Finally, the storm seemed to ease and we heard two men’s voices calling for us. Jim’s Uncle Newt and his son Renn had heard radio reports about this rogue storm turned hurricane. They had set out to find us, double rowing Newt’s Pinyan, a classic Adirondack style wood and canvas guide boat. 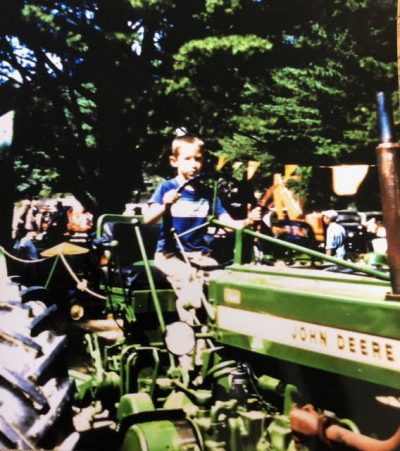 The author, around the time of this story.

Indeed, the storm was not over –we were in the eye of the hurricane and had to “Move it!” to get all of us and the canoes safely home before the winds returned. Pip, however, was still missing. Uncle Newt and Renn were skilled outdoorsmen, hunting and fishing guides, awesome downhill skiers, etc. Newt also had the biggest, gruffest voice I’ve ever heard.  He and his voice took off up the trail, shortly returning with a very humble Pip.

We all made it home before the second half hit. That’s all I remember.

Jonathan Smith is third generation summer folk on the High Mowing between Tolman Pond and Lake Nubanusit. He’s been a fulltime resident since 1972. This story took place in the late 1950s. 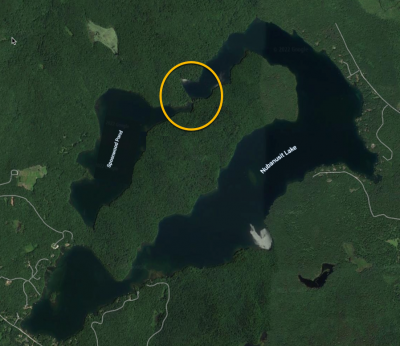 The site of Jonathan’s adventure