I have a vivid impression from one of the Zoom programs that the Library presented in 2020. One of the gallery images was of Bert Wingerson, who was a regular presence at the Library programs. One could see that she was holding her telephone close to the computer speaker. What you couldn’t see, but we knew, was that Priscilla Walter was at the other end of the line. Priscilla doesn’t see well enough to look at a computer screen, but she doesn’t want to miss anything. By hearing, through her phone, what was being narrated, she was able to get a surprising amount of information, as was evidenced by subsequent conversations or comments she made. 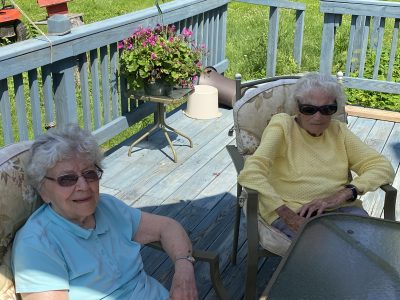 While both Priscilla and Bert (Roberta) have an abundance of other friends, it’s easy to pair the two of them. Priscilla’s family goes back to the early days of settlement in Nelson, so she represents a lot of history. Bert is a relatively recent arrival in town (1980s), but she quickly became immersed in learning about Nelson history, and has contributed significantly to the information and understanding we have of our town’s story. They are both interesting and valuable resources for anyone wanting to learn more about Nelson. 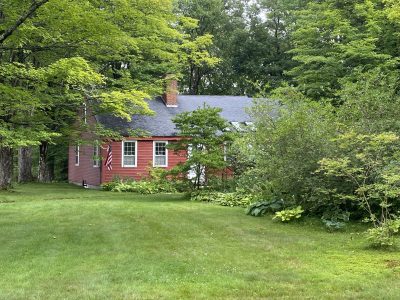 Two of Bert’s children, Rob and Susan, were both attending Keene State College in the early 1980s. Bert came to know the area a little bit, and was inspired by a Keene Sentinel profile of the writer Lael Wertenbaker, who said, “I have lived all over the world, and I liked Nelson the best.”
At the time Bert was working as an archeologist north of New York City. Rob had suggested that she should buy a house up here so that he could remove himself from dormitory life at the college. Bert looked at several homes in various towns, but nothing resonated. But when the realtor mentioned that he had a house in Nelson, she recalled the article about Lael. When she came to check out the house, she knew it was the right place. She is as enthusiastic about it now as she was then. She says her car no longer goes in the direction of New York.

Shortly after Bert moved up here she was doing a study of ceramics, and she had questions about Nelson’s past that no one seemed to have answers to. Approaching town officials and others, she bothered them enough so that they finally asked her to help. At the time she was taking a course in archiving, so she began to organize, in proper fashion, what are now the town archives. She has read virtually everything that has been filed, she has shared her knowledge through various articles in the Grapevine, and on the Nelson History website, as well as informally through many conversations. 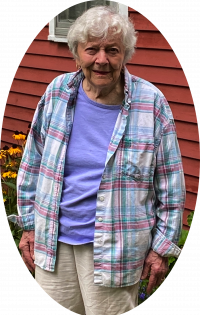 Her work made possible the Nelson History Calendars, which were produced in the four years leading up to the town’s sestercentenial in 2017, which in turn led to the Nelson History Group producing a collection of historically-themed postcards, available for sale at various Nelson events, and at the Harrisville General Store. Perhaps most important, her enthusiasm has inspired others to explore Nelson history, and her high standards for research and attention to detail have set the bar for things moving forward. At the civic level she has served on the Conservation Commission, the Cemetery Board, and the Buildings Committee.

Bert notes that people in Nelson have uncommon backgrounds, which is one of the reasons the town is appealing. Music and art are cherished, and that forms a lot of the backdrop for living here. Her own creativity is part of the mix: she is a wonderful artist and photographer in her own right, though her modesty makes this a not widely known fact. 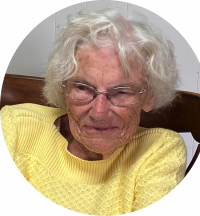 Priscilla’s mother, Cara Barker, had grown up in an earlier version of the house where Priscilla now lives. She rode a horse to school in Keene, and boarded herself and the horse there during the week. She met her future husband, Roscoe, at Keene High School. He rode to school on the milk train from Swanzey. After he graduated, he moved to the Boston area where he became a railroad engineer. Her mother became a school teacher and remained living in Nelson. Roscoe, no stranger to train travel, made frequent trips by rail up to the station in Harrisville, and from there found a way up to Nelson, for the purpose of courtship. The effort was successful, and they eventually married and settled in Somerville, MA.

So, Priscilla can’t say that she was born here, but she might as well have been. At the age of six months she was brought up and “presented” at the Nelson Congregational Church. Her childhood consisted of regular visits up here, to visit various relatives, which was just about everyone in town except the Tolmans (with whom they were good friends). Just to drop a few surnames: Osgood, Upton, French. From the time she was 12 she started spending her entire summers up here. Her early adult years were spent in Somerville, at her parents’ home. She had attended secretarial school, and was working as a medical transcriptionist. Attending local baseball games, she had noticed a young man named John Walter, who was working for Upjohn, a pharmaceutical company whose offices happened to work with the company she worked for. While they were not quite courting, by the time he went to serve as a medic in WW II, they were sending letters back and forth (his came through quite heavily censored) . With John returning stateside, the two got more serious, and they were married at the Nelson Congregational Church in 1945. 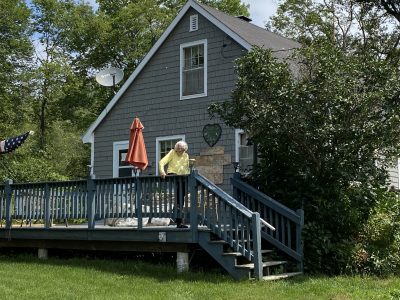 Her grandmother’s house was replaced in 1952 by the one that sits there now, and in 1969 she and John moved up here permanently. She remembers the first winter having to deal with frozen diaper pails – one of many challenges that defined the challenges of rural living. Over the years the house has seen many improvements, but it still possesses a warm rustic charm.

Bert and Priscilla first met at the Nelson Church. This would have been in the late 1980’s and just a few years after Lindy Black (who, as the daughter of Parke Struthers, is one of Priscilla’s many relatives) led the Church back to being a year-round operation. They are both involved in various church activities. It’s not unusual to get a call from Priscilla making sure that someone is in charge of refreshments for a funeral reception, or some other similar detail. Bert’s proximity to the church makes her a willing helper with a variety of tasks.

In recent years Priscilla’s voice has been reduced to a whisper. This has not diminished the quantity or quality of her words, and it’s not unusual to see her surrounded by tilting heads, anxious to hear whatever she is saying. And her vision is quite limited, but somehow she perceives things that many of us would miss. She is perpetually determined to make the best of things. One recent Sunday she attended church (as usual) – ­a particularly busy service since it involved the introduction of Eliot Fay, the new minister. Later that afternoon Kathy Schillemat stopped over for a game of Scrabble, and then Al Stoops came by to take her off to a potluck supper in town.

And you might say that there’s nothing growing under Bert’s feet either, except that may not be true. She is one of the founders of Monadnock Mushroomers Unlimited, a group which forages in the forest in late summer and fall, and she hosts their annual (and only indoor) meeting, which involves a potluck based on what people have found, and innovative recipes.She guides the “Road Scholars” on tours of the Church, and serves on the new Congregational Life Committee. She and Priscilla are the soul of the Nelson Ladies Aid.

We treasure these two women and the richness they bring to our town. 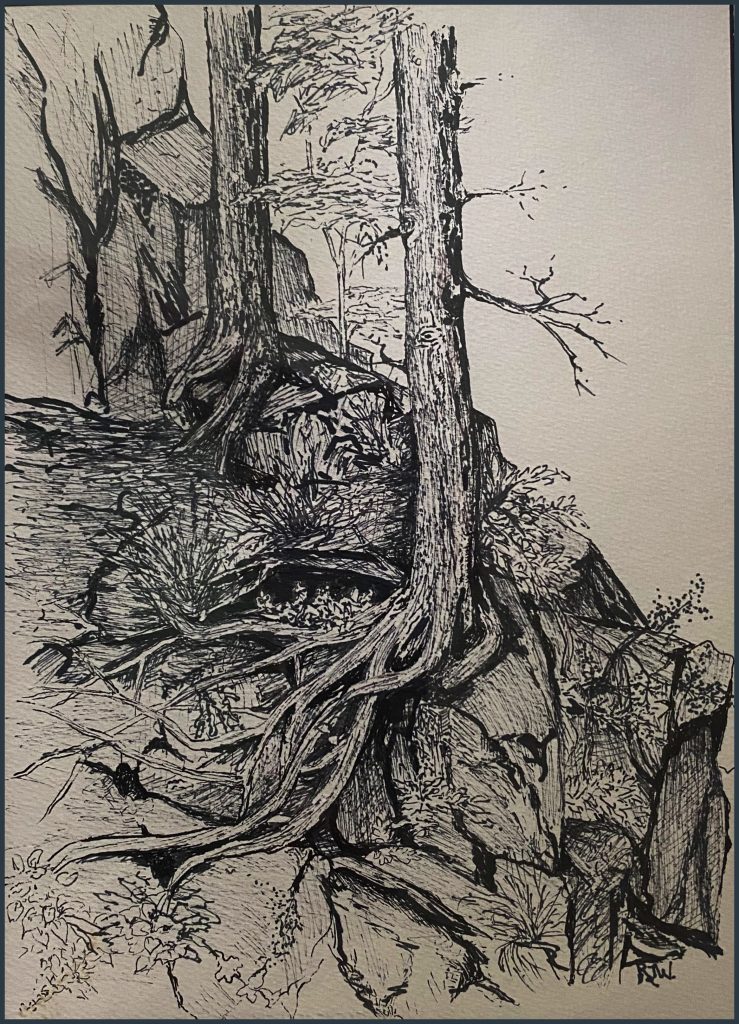 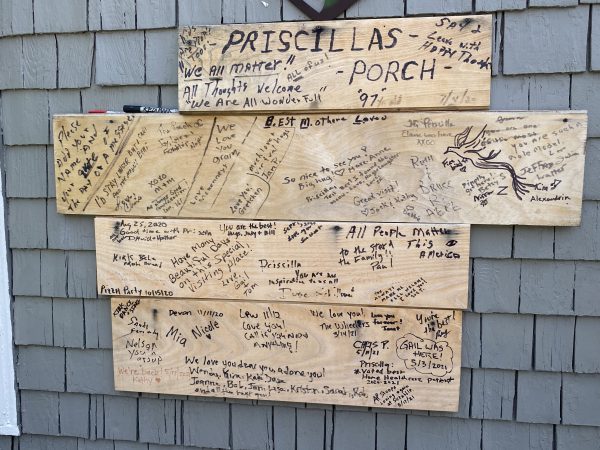 The “Guestbook” on Priscilla’s porch 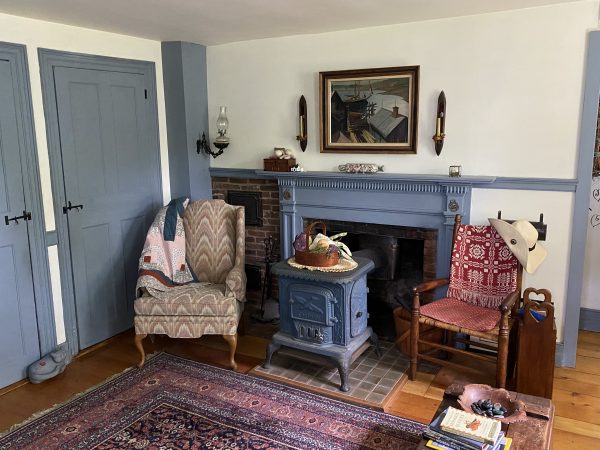 The cozy interior of Bert’s house.